After 5 years in jail, Mumbaikar acquitted of naxal charges 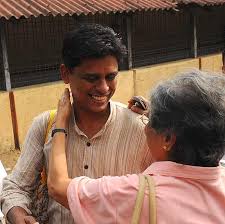 After spending five years in prison, Mumbai resident Arun Ferreira, who was slapped with 11 cases accusing him to be a Naxalite, is now a free man. He was acquitted from the last case pending against him last week.

Being a ‘political prisoner’ for all these years, Mr. Ferreira who is currently pursuing his degree in law has decided to fight for ‘many such others’ who according to him are denied of their constitutional rights across the country.

“Prison is certainly not the place where one wants to be. But my commitment towards bringing social change has rather increased after spending five years inside. That’s my gain,” he told The Hindu.

Whether it was opposing the privatisation of college canteen or to form the staff union, an alma mater of St. Xavier’s college in Mumbai, Mr. Ferreira was an activist from a very young age. In 2007, he was arrested in Nagpur after the police alleged him of being a Naxalite and framing a criminal conspiracy. Ever since his arrest, he was slapped with seven more identical cases.

Following his hunger strike in 2008, which lasted 27 days, one more case was added.

Ironically, when he was acquitted of all nine cases in 2011 and walked out of the prison, he was immediately arrested by Gadchiroli police in yet another case about naxal activity. “They almost abducted me, in front of my family and lawyers,” he recalled.

According to Mr. Ferreira, such practice of releasing and then re-arresting is very common in Naxal affected region. “They (the authorities) want to inflate the number of arrests in the region. If they don’t do it, the area might lose extra funding which comes from Central government aimed specially for naxal affected regions,” he said. He was released on bail in 2012 and was finally acquitted of the 11th case last week.

Around 13 prisoners from Nagpur Central Prison who are arrested under MCOCA and UAPA are currently on hunger strike, according to him. “Persistent refusal of bail and non-production of an accused in courts are the two causes for which they are fighting,” he said.

According to Mr. Ferreira, the authorities do not even bother to take an accused to court in areas like Gadchiroli and the entire trial is conducted via-video conferencing. “Even verdicts are given through such means,” he said.

He completed Masters in Human Rights while in prison and now has decided to work for the political prisoners across the country. “All those who are campaigning for peoples’ rights and are affiliated to certain political ideology are one set of political prisoners,” he said, adding that members of Muslim community who are arrested because of state’s prejudice towards them form the second such set.

It was his wife who financially supported the family and took care of their son all these years. His eight-year-old son was two and half years at the time of Mr. Ferreira’s arrest. “I wouldn’t mind if he too chooses activism at right time. I want him to do what his heart would want,” he said.

Mr. Ferreira has not deterred from his activist mode. “I do not believe that only new legislations will bring change. We need peoples’ movements, protests on roads and sustained campaigns among masses to bring the change,” he said.

But does he really support an armed revolution for a social change? “I have a belief that change will take place. Whether it will be with arms or without depends on the leaders. My preference is for non-violence,” he said.