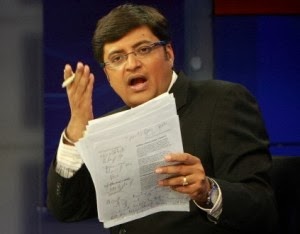 It was like any other NewsHour panel discussion except that Arnab Goswami appeared a little graver than usual.

“GOOD EVENING AND WELCOME TO THE NEWSHOUR, LADIES AND GENTLEMEN!,”

“The top story tonight: It’s been over two weeks since a speeding Aston Matrin, registered in the name of Mukesh Ambani’s Reliance Ports and Terminals, rammed into multiple vehicles, leading to injuries. There are many questions but few answers. Who was the man behind the wheels? Why is the media pussyfooting on the issue?”

Arnab then introduced the panelists.

“Joining me tonight to discuss this fishy incident and the troubling issues it raises, Sanjay Jha from Congress, Meenakshi Lekhi from BJP, Arthi Jayarath and….”

Arnab paused and raised his pitch,

“MR. MUKESH AMBANI HIMSELF JOINING US FROM ANTILLA.”

Mukesh smiled nervously and shifted uncomfortably in his seat. He had the look of a man being led to the guillotine.

“My first question to you Mr.Ambani, is there a cover up?”

“All..Allow me to explain, Arnab,” Mukesh muttered. “Already, a 55 year old man, Mr. Bansilal Joshi, a driver with my company, has presented himself before the police and admitted to being behind the wheels. I think the matter should end there.”
“No, the matter doesn’t end there, Mr.Ambani,” Arnab cut in. “Eyewitnesses say a young man was seen jumping out of the car. I quote here “a young, clean-shaven, portly man was seen hopping out of the damaged Aston Martin into two SUVs trailing the Aston Martin.” The man who presented himself to the police on the other hand was mustached and over 50 years old. Please explain, Mr Ambani.”

Mukesh now appeared flustered. Meenakshi Lekhi and Jha looked on, aghast. After all, Ambani was the boss of their respective bosses.
Sanjay Jha jumped in to minimize the damage.

“Two quick points, Arnab. One, the accident, unfortunate as it may have been, lead to some injuries but it still pales before the horrific genocide of 2002 for which Mr. Modi has a lot to …”
“Are you on Mr Ambani’s payrolls too, Mr Jha? Then why are you changing the subject?”

“I will and will always remain a loyal Congressmen led by Rahul Gandhi who is a breath of fresh air in this…”
“Don’t change the topic, Mr. Jha. For two weeks this incident has been dragging on. MR. AMBANI, WAS YOUR SON IN THAT ASTON MARTIN?”

Mukesh was close to tears now. No one had spoken to him like this ever.

“I ..I…don’t know what to say. All I know is a driver from my company has owned up to..” he began.
“You cannot get away so easily, Mr. Mukesh Ambani. Other news channels may not have the balls to cover this since it involves Mr. Ambani but not your favourite news channel, NewsHour. AND TONIGHT THE NATION WANTS TO KNOW…”

Arnab got up, sweating.

“Honey, what’s wrong?” Mrs. Arnab asked. “Looks like you had a nightmare.”
“Yes. Absolutely horrid. Would you believe it? In my dream, I was interrogating Mukesh Ambani. The very thought of it gives me the shivers,”

Arnab squeaked, reaching for a glass of water to settle himself.

“Oh dear,” his wife said. “You’ve been putting in too many hours on NewsHour, darling.But yeah, you dreaming of doing a ‘dented and painted’ operation on the big man beggars belief. Are you sure that’s what you dreamt?”
“Yes,” replied Arnab. “Unless this also is dream. Wait a minute. This could be a dream….”

Mukesh Ambani woke with a start. It was 3 AM. From his 15th floor room in Antilla, the entire stretch of South Mumbai was visible; its apartments appearing like pieces from a Lego set. Mukesh cursed himself and made a mental note to himself not to watch NewsHour before going to sleep.
(The Unreal Times – Satire)