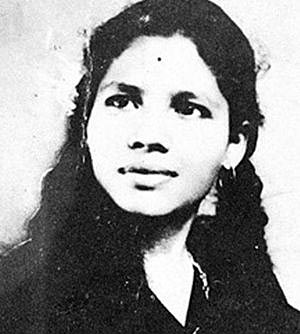 It’s important that atleast some of us remember that such a woman still exists in both, a physical and legal vacuum. Both, because of those who claim to “love her”. She is permitted passive euthanasia – a fact not known to most media — her minders have to approach the Bombay High Court. Will collective cowardice, once again, continue to condemn this woman to a living hell?

A woman in Bombay, India called Aruna Shanbaug turns 64 on June 1 (today). This would make it 39 years in this semi-comatose condition after she was sodomised and left for dead in November 1973.

She has the world’s most dubious distinction of being the longest-known such case.

She is, according to hospital records from that time and re-confirmed since, also blind, unable to speak words, given to either howling or grinning or being catatonic, irreversibly brain-damaged.

She is also, presumably the most horrific human rights violation on an individual ever. She is not given medication. She is not even on cathetor to collect body waste. Her bed is soiled and she lies like that till her care-takers — the nurses and ayahs of the municipal run hospital in which she languishes — clean her.

What makes it a tragedy is that Passive Euthanasia is now allowed in India. All it will take is for her feed to be tapered off — as per international norms governing the process — while introducing pain-management medicine into her nose-tube through which she is fed directly into her stomach.

Aruna’s even greater irony is that while she and Pinki Virani have catalysed the Law on Passive Euthanasia it has also been deemed for her — a matter not known to most — albeit as follows: The Supreme Court said the hospital was her “next friend”, not Pinki Virani (the incident happened in 1973; the Author knows her from 1982 when she was a cub-reporter). The Supreme Court then indicated — in the open court — that another specific plea could be filed in the Bombay High Court “should they change their mind”. Please crosscheck with any of the lawyers present in the court that day; the room was jam-packed with both, lawyers and media. Please cross-check by reading the judgement for yourself as well.

“Should they change their mind”. Are they likely to? Especially since they feel so noble about taking care of her while she suffers so horribly.

Did this startling fact even come to light — that all it will take is for some municipal employees (since that is what the nurses and doctors are at that particular BMC-run hospital) to approach the Bombay High Court?

[In March 2011, the Supreme Court of India, passed this historic judgement permitting Passive Euthanasia in the country. This followed Pinki Virani’s plea to the highest court in December 2009. The corollary of this same landmark judgement is that there might be a boost in organ donations, once again positively helping millions of Indians. (The judgement provides clarity on the definition of brain-death since healthy vital organs are wasted while arguments rage over the medico-legal definition of brain-death.)]