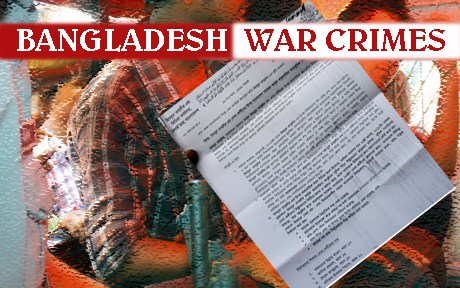 Dhaka, Nov.4 (ANI): Bangladeshi freedom fighter and chairman of the country’s University Grants Commission A. K. Azad Chowdhury has said that the successful holding of the war crimes trial in his country would set an example for the rest of world.

War crimes tribunal, which was set in 2010, requires wrapping up investigations of all those who were accused, as the government aims to finish their trials before Prime Minister Sheikh Hasina’s five-year term ends. She took charge of office in early 2009.

A former chief of Jamaat-e-Islami, Bangladesh‘s biggest Islamic political party and the country’s top Islamist leader, Golan Azam, is on trial for helping the Pakistani army during Bangladesh’s 1971 war of independence when the then East Pakistan broke away to form Bangladesh.

Jamaat -e-Islami and its close ally the opposition Bangladesh Nationalist Party allege that the tribunal hearing the case takes orders from the government.

While talking reporters in Dhaka, the former freedom fighter stressed that holding of trial in a proper manner will project Bangladesh with a positive image.

“Why not there should be a justified trial to strengthen and bolster the human values, and give a teaching and lesson to the world that nobody can get away doing this sort of genocide and criminal activity and war crimes? This is more needed for the civilisation to uphold this sort of trial. It is not only Bangladesh’s cause, definitely Bangladesh has sore point in its heart,” said Chowdhury.

Chowdhury also added that the implementation of justice in this case will deter other tyrants in the world and will put an end to such acts of crime against humanity in future.

“The world at large should and will appreciate in such a manner that no other evil force in the world wherever it is will venture to commit crimes against humanity, to commit war crime. We are living in a civilised society though there are hotspots in the world. But systematic genocide and killing and such incidents are few and far behind. If this trial is properly done that will work as a deterrent to any other people who are conspiring or will be conspiring to commit genocide,” he said.

Chowdhury said that if anybody would try to defend the alleged war criminals, it would put the entire genocide undercover.

“This sort of trial should not prolong that much. Some people are bringing about all those defence with the objective to delay the whole process. This is in another word denial of the war crime trial. I expect the process will be expedited for the sake of humanity, for the sake of Bengali nation, for the sake of mankind,” he said.

The Islamist groups in Bangladesh want to scrap “secularism” as a state principle in the Muslim-majority country.

Jamaat-e-Islami opposed Bangladesh’s independence from Pakistan and fought with the Pakistan army.

They were allegedly involved in war crimes and have thousands of militant followers, including in the Defence forces, analysts say.

Dozens of other Jamaat leaders including its chief Moulana Motiur Rahman Nizami and secretary-general Ali Ahsan Mohammad Mujahid are already in prison accused of war crimes.

Court officials said Sayedi was the first to be formally charged with war crimes, and others would be charged soon. (ANI)

The court also threw away a plea by Azad’s counsels seeking his acquittal.

The prosecution on Sept 2 had submitted former charges linking him to crimes against humanity including genocide, murder, rape, arson, loot, abduction, deportation and persecution.

‘Bachchu Razakar’ is said to have been an accomplice of Jamaat-e-Islami Secretary General Ali Ahsan Mohammad Mujaheed in Faridpur district during the war.

He was a member of Jamaat’s student wing Islami Chhatra Sangha when he was a student of Rajendra College in Faridpur in 1971.

After Mar 25, 1971, Azad formed a group of his own which committed crimes against humanity in different places in Faridpur during the war.

The ICT-2 on Sept 9 accepted charges and ordered his arrest and production by Sept 23.

The arrest warrant for him was issued in April, police failed to find him after raids on his office and residence. He is believed to have fled to Pakistan.

The tribunal on Oct 7 decided to continue trial in Azad’s absentia as he did not turn up even after public notice was issued for his appearance.