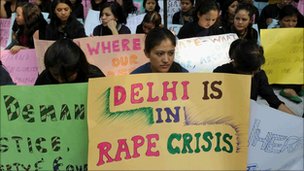 In an early morning action on Saturday, the police removed all protesters from Vijay Chowk and were taken to an undisclosed location by a bus, media reports said.

However, the media is not being allowed in and around Vijay Chowk, TV reports said.

A number of protesters who stay put at Raisina Hill to protest the gangrape of a young girl were evacuated on early Sunday morning.

The protesters, who spend a chilly night in the open after they fought pitched battle with police throughout the day on Saturday, were taken into a bus by police.

Police had also picked up protesters from outside Congress chief Sonia Gandhi‘s 10, Janpath residence in the wee hours today.

In a surprise move, Gandhi had came out of her residence and met protesters late last night.

According to a protester, Gandhi told them “I am with you. I can’t tell when the justice will be delivered, but surely it will be. We will do something.”

The protesters when asked for a deadline, she said, “I can’t give you a deadline but action will be taken.”

The detentions came as part of a police plan to contain protest near Raisina Hill, the seat of power.

Four metro stations near India Gate and Raisina Hill have already been closed from this morning till further orders.