FAQs-Who needs moral policing, how much and why? #mustread #Vaw #1billionrising #Valentinesday 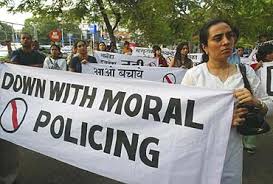 Love in the time of moral policing

The moral police are everywhere. Crawling out of the woodwork into our public spaces. In our legislative assemblies, in our board rooms, in court rooms, on the streets, in colleges, in cinemas and cyber cafes, gardens and pubs, even in police stations. Alas, and perhaps in our heads too. The rabid Sri Ram Sena or the Shiv Sena or the Bajrang Dal foot soldiers who demonstrate their love for ‘Indian culture’ by molesting girls wearing jeans and vandalising Valentine’s Day celebrations are unfortunately only the tip of the iceberg. They are supported openly and tacitly, by many ‘honourable’ others, ranging from chief ministers and health ministers to members of the National Commission for Women.

So many people in our country are in a state of moral panic over ‘western’ culture, pub culture, cyber culture and the many other ‘degenerate’ cultures that are polluting the sacred body of our Mother India and her pristine, fragile ‘Indian culture’, all of which call for more and more policing. Here are some Frequently Unasked Questions (FUQs, no pun intended) about moral policing in India.

The list is long, maybe endless. At the top are impressionable young women and girls, who need to be protected from the corrupting effects of the afore-mentioned ‘evil’ cultures. Women are progenitors and homemakers — their sexuality needs to be strictly monitored, controlled and harnessed. If they have lost moral values, how can they become part of the eugenic project for a healthy and a morally sound generation next? What would happen to the sacred institution of the family if women got out of hand? Remember the Shiv Sena violence against a film like Deepa Mehta’s Fire? Love between two women leaves out the boys as arbitrators of women’s sexuality. Boys after all will be boys, they will settle down after marriage; but girls must be neither seen nor heard. Their ability to withstand the effects of ‘debauchery’ is far inferior to the male of the species. They cannot even handle cigarettes and alcohol. In other words, the moral police have to zealously shield all ‘less powerful others’ who are morally weak and can easily be perversely affected by stimuli of every kind: films, websites, beer, jeans, western music, birds and bees, in fact the list of provocative objects is infinite and ever growing.

This invention of a less powerful other is rampant and not confined just to the moral police, but informs the way in which ‘media impact’ is commonly framed. Our chattering classes are constantly exercised about the impact of the media on children, women, illiterates, poor people, villagers, slum dwellers — all subsumed under the category of the gullible and easily swayed ‘masses’ who have to be protected. This calls for a morally superior, intellectually more discerning ‘filter’ (in other words, people like ‘us’) who will decide what is fit for their impressionable eyes and ears. The censorship of the state is regarded as essential to uphold moral and aesthetic standards which popular cinema and television are prone to constantly violate.

This censorious mentality is widespread in our society and is perhaps uncomfortably close to the fine art of street censorship practiced by the Thackerays and Muthaliks.

Everything, but particularly all sites and signs of ‘modern’ ‘western’ culture, from greeting cards to cell phones, from pubs to cyber cafes: moral panic always hovers over frontier technologies. Our parents thought that films, or even radio, corrupted us. We worry about our children on the Internet; television has already become passé.

When printing was invented, our forefathers would have worried about its corrupting effects on young impressionable minds. In fact, in the medieval scriptoriums in European monasteries, access to certain texts was denied to younger writers. Today, sadly, no one grieves over the corrupting influence of books.

We forget that each generation has its own relationship with the cultural products of its own times. Personally, we have always thought of television as a ‘movie in a box’. When we took our daughter to her first movie, she asked us incredulously, when the first image appeared — “Is that a huge TV on the wall?” As someone who was born into a TV era, the relationship she has with the medium is qualitatively different from ours. Our collective inability to understand new technologies and our suspicion of what young people might be up to behind our backs makes us struggle to assert control — an essentially futile endeavour. Moral panic breeds behind the doors of the unknown.

Question 3: Why do we need policing?

The answer is simple: because ‘Indian Culture’ is fragile, because many Indians have delicate sentiments that are very easily hurt. And when these sentiments are hurt, maybe a few hundred people get massacred or raped, or maybe a shrine is pulled down or several thousand bar girls lose their jobs.

The state is assiduous in protecting the hurt sentiments of these sentinels of virtue. It usually turns a blind eye and sometimes even defends these actions — after all, how long can one hold back hurt sentiments? Our moral police know that they can strike with impunity; the chances are that the victims will get blamed for ‘provoking’ them.

Question 4: What is ‘Indian culture’?

The moral police are blissfully unaware of the contested nature of both the terms. Many years ago, a second generation ‘Indian’ child in London hesitantly admitted to us that she did not speak any ‘Indian’. Indian culture is as elusive as Indian food. In fact, one strong marker of it is the chilly. How many among the moral police, who lament about the fragility of ‘Indian culture’ know that the chilly first came to India with the Portuguese from South America not so long ago?

There are grids of exclusion at work, relations of power that begin to define the boundaries of Indian culture. A painting by Hussain done in the 1960s is suddenly a threat to our pristine traditions. Many of our 330 million Hindu Gods have spent the prime of their lives unclothed; the time has come to design moral robes for them. Khajuraho and Konarak now badly need saffron fashion designers.

Question 5: Why do the moral police indulge in policing?

Unfortunate tautology. How else would they grab the eyeballs of the nation? With very little work and no long-term investments, they can become famous overnight and reap rich political dividends. There are few risks involved, given the state’s sensitivity to their hurt sentiments.

Valentine’s Day provides rich opportunities. Dubbed as a threat to Indian culture, it throws up immense possibilities for great photo ops. The media has coined an endearing acronym to discuss certain goings on between young adults — PDA, roughly translated, it reads public display of affection. These acts are firmly handled by the moral police, who reiterate their faith in our great traditions by molesting the women publicly in front of television crews, who promptly arrive at the scene of the spectacle, forewarned and forearmed.

Question 6: Who gives the moral police the right to police?

Too many of us, through our sins of omission and commission. When the captains of industry cosy up to a champion of ethnic cleansing, when a leading television news channel gives an award to a staunch defender of the politics of hate, one begins to understand how deep and pervasive the rot is.

The normalisation of hate politics, the selective amnesia of the middle class — all these add up to strengthening the power of the moral police.

Question 7: What of love in the time of moral policing?

The moral police hate love and love hate. While the militant ones are easy to spot, the ‘soft’ ones are insidious.

They begin to define the realm of the ‘normal’. They censor our films, define dress codes, and make laws to control the Internet, all in the name of decency and order, of protecting the vulnerable and preventing social chaos.

While we must protest, firmly and loudly, against gross violations like Mangalore and Meerut, can we begin to speak fearlessly against the little everyday violations, the covert ways in which our spaces for love and freedom are encroached upon? And above all, we must never forget: Ayodhya and Mangalore are both manifestations of the same politics of hate and intolerance that we must resist till our last Valentine’s Day.

(The authors are professors at Tata Institute of Social Sciences, Mumbai)