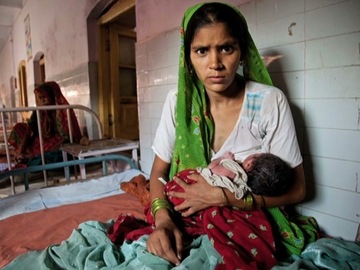 CHENNAI: For a state that prides itself in maternal health, this should be a shocker: One mother dies for every 1,000 sterilisation operations in Tamil Nadu. In five months, between April and August this year, of the 1.39 lakh women who went under the knife for sterilisation, 129 died following the procedure.

While officials in the health department say they have to conduct further investigation to ascertain the cause of death, experts in the field say it is the mad rush to achieve annual targets, and poor infrastructure that claim lives. In the past three years, 190 women died post operation. This year, there has been a three-fold increase.

Though sterlisation is less complicated for men, only 1% or just 750 of them came forward for sterilisation in 2013. While for men, it is a simple 20-minute procedure, doctors have to keep in mind several factors for women. The government records show no man had died after sterilisation. “Sterilisation is often combined with caesarian, abortion or normal delivery, so complications could arise because of other factors,” said Dr S Rathnakumar, maternal health advisor to the state health society, Tamil Nadu.

Sources in the state health department, however, attributed the deaths to poor adherence to pre and post-operative care and complications due to anesthesia. Although the state has introduced a safer and a more advanced method of sterilisation – through laparoscopic incisions, 85% of the surgeries are usual tubectomy procedures, due to lack of infrastructure. In this procedure, the fallopian tubes – through which the egg travels to the uterus – are surgically blocked or cut. The pin-hole procedures are reserved only for women after an abortion or during an interval period after delivery.

The unusual increase in deaths underlines two issues – callousness in recording data and poor facilities, say public health experts. “If the number is to be believed, then the government must have been under-reporting the actual number of deaths all along. It just shows the laxity of the government in collecting facts,” said Venkatesh Athreya, an economist who has worked extensively with the state government on maternity welfare.

“If these women had died of other complications like they say, then what are these complications. Why aren’t they reflected in the statistics? It just shows that certain procedural protocols are not followed while investigating maternal deaths at the district level. I am deeply shocked,” said Athreya.

The number of failed sterilisation operations in women also increased by 400 times in one year. According to the statistics submitted by the state government to the Union ministry, the number of failures following female sterilisation stood at 15,460 this year, 456 in 2012 and 408 in 2011. Officials had no explanation for this unusual rise.

Simultaneously the number of cases of complications following female sterilisation also saw a four-fold rise, from 16 in 2011 to 63 this year. Officials said “most” of these complications were not life threatening. Gynecologists say if post operative care is not given properly, even seemingly simple complications could result in death.

“Post-operative care is as important as screening the woman before undertaking a tubectomy or laparoscopy. A slight oversight could result in death,” said Dr Geetha Haripriya, chairperson and consultant in reproductive medicine, Prashant Hospitals. Bleeding, infections, damage to the intestine and bladder and laceration of the cervix and perforation of the uterus, blood vessels or the fallopian tube are some of the risks attached to a botched surgery, she said.

“We should audit all these deaths. There should be a reason why Tamil Nadu is leading in the number of fatalities. It could be because of the lack of experienced surgeons at the district level. Whatever the reason, an investigation must be conducted,” said the doctor.