Institutes such as the Hyderabad University, National Institute of Design, Satyajit Ray Film and Television Institute lend their support to the protest 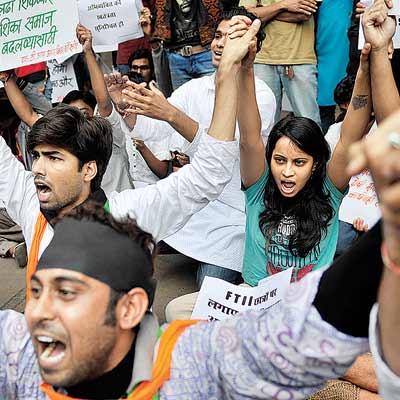 Students from the Film and Television Institute of India (FTII), who refused to take the attack on them on August 21 lying down and continued protests via social media, have now got support from various people throughout the country.

The National School of Drama in New Delhi announced that they would organise a protest rally to Jantar Mantar in solidarity with the FTII students. “We condemn the violence against freedom of expression. We are doing our best to show our support,” said JA Regin Rose, president of the NSD Student’s Union.
Students unions at many educational institutes such as the Hyderabad University, Ahmedabad’s National Institute of Design, Kolkata’s Satyajit Ray Film and Television Institute, LV Prasad Film and TV Academy and the Jan Sanskriti Manch have come out openly to support the FTII students. Members of the film fraternity too have lent support to the stir.

The alumni organisation of the FTII, GraFTII, has also expressed their concern at the increasing manifestation of intolerance in the country. Former chairman of the FTII, UR Ananthamurthy said, “No creativity will be possible if we allow such intolerance. It is a shame that a group of young men have reacted so violently.”
Anand Gandhi, the director of renowned film Ship of Theseus, came out in full support  and said, “Let’s keep the dialogue alive, no matter what the threat is.”

Despite opposition, FTII students go ahead, take out silent march


Students association of Film and Television Institute of India (FTII) on Monday carried out a protest rally from their campus on Law College Road to the Omkareshwar Bridge, where Narendra Dabholkar was murdered. The march of solidarity, as they called it, was initially deemed unnecessary by the police and the students were denied permission. However, the student body decided to bypass the order and started their march. The police stopped them at the gate and the protestors sat down and started the proceedings.

Students demanded a freedom of expression, a freedom from fear of being attacked for expressing opinions and also appealed citizens to show some unity, solidarity and compassion.

Taking a neutral stand, DJ Narain, the director of FTII said, “We are supporting the students in the legal aspect in terms of the event that happened on August 21. However we cannot give them permission to go through with the rally unless the police give them a nod.”

The police,  after long discussion, granted permission and the students embarked on their route with utmost discipline. With black bands covering their mouths and all their slogans and demands written on placards, they led a silent march from Law College road to Omkareshwar bridge, where they observed a one-minute silence in the memory of Narendra Dabholkar.