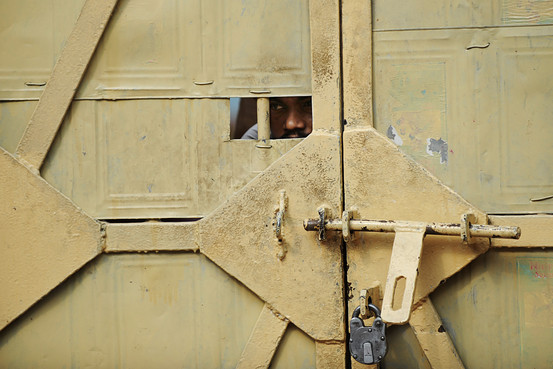 Roberto Schmidt/Agence France-Presse/Getty Images
A man peeked through an opening of a door to a prison ward at the Tihar jail, New Delhi, April 26, 2012.

This week, India Real Time presents an in-depth look at the country’s prison and custody system.

It is a system that still carries many attributes of its origins in British-run colonial India, and gives a high degree of discretion to how state governments apply the penal code — and who ends up behind bars, whether serving prison sentences, or in temporary army or police custody.

Experts note that the national government, over decades, hasn’t funded the expansion of the prison system to meet the increasing ranks of prisoners. In part, those ranks have increased because India’s court system is backlogged with 65% of India’s 240,000 people in jail yet to face a verdict in court, according to government data. They also point to allegations of abuse in army custody, which the army denies.

In four chapters this week, India Real Time will examine different aspects of life under custody, as well as attempts to improve it. They include the experience of those facing trial as well as efforts being made to promote rehabilitation over punishment. 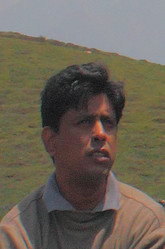 MUMBAI, India – When Arun Ferreira went to prison in 2007, his son was only two. Today, they are reunited, and a tide of private anguish has at last begun to roll back and wash away.

“My family didn’t tell him that I was in jail, they told him I was away on business for five years,” Mr. Ferreira says.

“Today, my son still doesn’t believe it. Recently, he saw a picture of Nelson Mandela somewhere. I explained who he was, and then I mentioned [what happened to me], and he thought I was fibbing.”

On an unusually sunny afternoon during monsoon season in the residential neighborhood of Bandra, Mr. Ferreira is gracious and funny as we sit in a local coffee shop to discuss his experience in jail. Mr. Ferreira was arrested under the auspices that he was a Maoist rebel, planning to blow up the Deekshabhoomi Complex, a monument in the town of Nagpur, where the Dalit icon Ambedkar is believed to have embraced Buddhism for the first time. Mr. Ferreira spent most of the following roughly four years and a half years in Nagpur’s Central Jail.

The Communist Party of India (Maoist), are also known as Naxalites, a reference to the West Bengal town of Naxalbari, where their movement began. Started as a left wing political group in the 1940s, in the 1960s they launched an armed struggle against the Indian government, which they have been violently opposing ever since.

Their largest support base comes from local tribes who seek to retain their land resisting industrial interests. In 2006, Indian Prime Minister Manmohan Singh famously described Naxalism as “the single biggest internal security challenge ever faced by our country.” Members of the group could not be reached.

Mr. Ferreira was charged with attacking a police station, firing on police, and booked under the Unlawful Activities Act of 2004, a law created to bolster security against possible terrorist attacks.

Mr. Ferreira claims he was held for organizing slum-dwellers to unite in protest against the demolition of their homes. Such demolitions are a frequent source of strife here in Mumbai, often pitting poorer locals against police and property developers. Mr. Ferreira is currently out on bail and contesting two additional charges – allegations that he illicitly possessed arms and fired on police – that were leveled against him by plain-clothes officers during his time of awaiting trial in Nagpur. Mr. Ferreira denies any wrongdoing.

In Sept. 2011, a court ruled that Mr. Ferreira was innocent of all eight of the charges that were placed against him, over four years and eight months after his initial arrest.

Justice Hosbet Suresh, 83, is a former judge of the Mumbai High Court whose experience working inside the system has driven him, during his retirement years, to become an advocate for prisoners’ rights. He says that India’s slow trials are being made even slower by a lack of judicial manpower.

“There are simply not enough judges to handle all of the cases,” says Mr. Suresh. “We just have too few of them relative to the population here.”

According to the Indian Bar Association, as of 2010, there were over 30 million cases pending in courts across India due in large part to a ratio of 11 judges per million people. This leaves India with a persistent backlog of cases waiting to be heard.

As a result, “more than half of the prison population here is under trial,” Mr. Suresh estimates. It’s a lot more than half: The most recent survey conducted by the National Crimes Record Bureau, a government agency, found that as many as 64.7% of Indian prisoners have not yet been convicted. And while prisoners who are ultimately convicted will see their time spent in jail while waiting for trial reduced from their sentence, such provisions provide very little consolation to the innocent, like Mr. Ferreira.

For some it’s even worse: According to the study, 1,486 under trial prisoners, or 0.6% % of the total, had been jailed for five years without having had a single day in court.

Another reason prisoners sometimes wait years for their trial is that, according to government data, the majority of those arrested are too poor to afford bail and legal counsel.

India lacks a federal department of prisons, like that of the United States. Instead, prisons are a responsibility of individual states, although the ministry of law lays out broad guidelines on how to administer them.

Mr. Ferreira believes his politics may have played a role in his prolonged detention. He says he was shuffled between several different facilities during his time at Nagpur Central. He spent his first year in the high security Anda barrack, and his final two years were spent in what’s known as the Gunah Khana, or punishment cells.

When I reached out to Nagpur Central Jail, a senior official said the prison does not comment on the cases of specific inmates. The official added that it is the policy of the prison to keep convicts and prisoners who are under trials separated in adherence with the law. According to Mr. Ferreira’s account, he found himself rubbing shoulders with those convicted of the 1993 bomb blasts that rocked Mumbai, and with the perpetrators of the Kherlanji massacre of 2006, where Dalit men and women were slaughtered by upper caste Hindus.  He had little choice but to remain calm and do his best not to draw attention to himself for that entire year. A spokesman for Nagpur Central Jail declined to comment on Mr. Ferreira’s allegations.