Days after he kicked up a row by stating that there are more temples than toilets in India, Union Rural Development Minister Jairam Ramesh Sunday urged women not to marry into families that do not have toilets in their homes.

“Don’t get married in a house where there is no toilet,” he told a gathering, mostly of women, at Khajuri village near Kota. “You consult astrologers about rahu-ketu or planetary positions before getting married. You should also look whether there is a toilet at your groom’s home before you decide to get married.”

Ramesh, who launched the third edition of Nirmal Bharat Yatra at Sangod here, cited a slogan coined by the Haryana government, “No toilet, no bride”.

Ramesh also narrated the story of Anita Narre, who left her husband’s home in Madhya Pradesh two days after her wedding when she found the house didn’t have a toilet. Noting that sanitation is an

issue related to women’s dignity and safety, Ramesh said Nirmal Bharat Abhiyan is a people’s movement aimed at eradicating the menace of open defecation in 10 years.

Minister also criticised Rajasthan for not doing enough to provide proper sanitation facilities to the people.

He pointed out that of the 9,177 gram panchayats in Rajasthan, only 321 have become free from open defecation.

Meanwhile, members of saffron outfits showed black flags to Ramesh at various places protesting against his temple and toilet remarks.

The Minister had recently said that the country has more temples than toilets, leading to protests by right wing Hindu outfits.

Last year, a tribal woman rejected her in-law’s house because there was no toilet in it. Soon after her marriage, she snubbed her newly wedded-husband and told him that she would live as his wife only if he got a latrine constructed. Otherwise, she would continue to live in her father’s house. 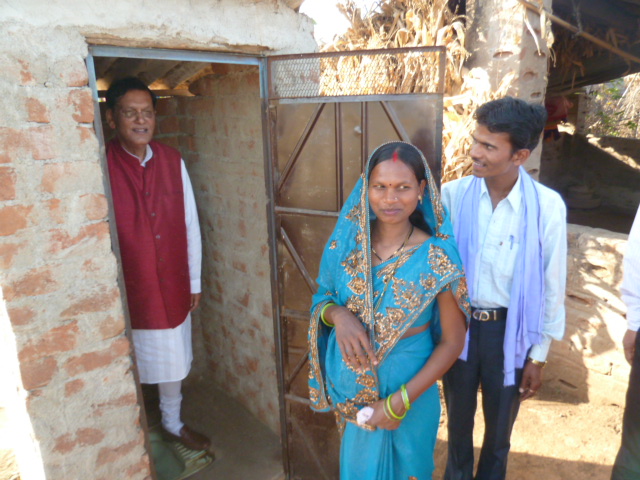 Anita was pursuing a BA degree when her father decided to marry her away to Shivram Narre of Bhimpur tehsil. Like every obedient daughter, she agreed to marry Shivram even though he was an agricultural labourer belonging to a BPL family and was less educated than her. But all hell broke loose when she was asked to go to the fields the morning after her marriage on May 14, 2011. The newly wedded bride did not utter a word when she saw the latrine of Jheetudhhana under the open skies. She survived the ordeal in her in-laws’for two days after which, according to tradition, she had to go back to her parents’ house for further rituals.

Once inside her parents’home in Chicholi town, she refused to go back to Jheetudhhana. When the husband came to take her home, she flatly refused. He asked why? In reply, Anita said: Because there is no proper toilet facility in that house.” She asked her husband to come and fetch her only after that toilet had been constructed. Anita’s refusal to go back to the in-laws initiated a revolution in Jheetudhhana. First Shivram went to the janpadh panchayat asking for government schemes that helped in toilet construction. The panchayat helped him with organising funds and a latrine was built at the back of his house.

But as Anita’s story spread through the village, Jheetudhhana’s residents started planning the construction of toilet in every hutment for fear that more girls will refuse to live there. Villagers flocked to the janpadh panchayat with applications for funds to build toilets. Meanwhile, the district administration of Betul has sent a recommendation to the state government to make Anita Narre the brand ambassador for Madhya Pradesh’s sanitary programmes.