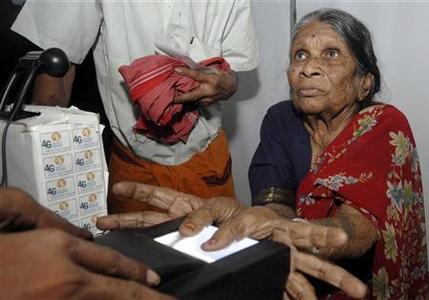 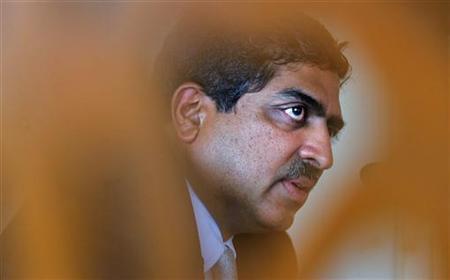 (Reuters) – India is shaking up the way it gets billions of welfare dollars to the poor with a plan that could one day reshape the economy and tackle graft keeping millions in poverty, but in one small town a pilot of the new system is proving unpopular.

Putting India’s technological prowess to work to bring the entire 1.2 billion population within the reach of government, the widely feted unique identity (UID) project set up by Infosys co-founder Nandan Nilekani two years ago has so far scanned the irises of 210 million people into a biometric database.

Now, in a more ambitious version of programmes that have slashed poverty in Brazil and Mexico, the government has begun to use the UID database, known as Aadhaar, to make direct cash transfers to the poor, in an attempt to cut out frauds who siphon billions of dollars from welfare schemes.

“We can ensure that the money goes to the correct person and the role of middleman is ended with direct transfer of benefits to the needy,” Prime Minister Manmohan Singh told a crowd of thousands in the Rajasthani town of Dudu on October 20, as he launched the programme, accompanied by the president of his Congress party, Sonia Gandhi.

Following a slew of reforms aimed at jolting Asia’s third largest economy from a deep slump, the plan could over medium term bring some order to India’s troublesome fiscal deficit by plugging leakages of subsidized grain, fuel and fertilizer.

Two years ago, a McKinsey report estimated such an electronic platform for government payments to households would save up to $18 billion annually – enough to wipe out one-sixth of a fiscal deficit that could hit 6 percent of GDP this fiscal year.

In the next year alone, the government plans to transfer the wages for over 50 million workers in a rural job scheme, along with pensions for 20 million senior citizens and about 5 million education scholarships and some fuel subsidies directly to bank accounts linked with the Aadhaar identity number.

But in Beelaheri, a small village in the Rajasthani region of Kotkasim where the kerosene pilot began last year, hundreds of bank accounts have been set up without referencing the UID database, as the government pushes ahead with the politically rewarding cash transfers before readying Aadhar to identify the correct beneficiaries.

Critics warn good intentions are already being undermined by the hurry ahead of a national election due in 2014 and by vested interests, including bureaucrats and politicians in states, who stand to lose discretion over distributing funds.

The government is aiming for about two trillion rupees of cash transfers under different schemes by March 2014 even if the distribution of the ID numbers is incomplete, according to several media reports.

By lowering costs, Aadhaar could make a planned food subsidy programme that is a pet project of the left-leaning Sonia Gandhi easier to finance, for example.

The Congress party is banking on that programme to help it win a third consecutive term, despite voter anger at graft.

The pilot project in Beelaheri, a village of 2,000 people some 130 km (81 miles) southwest of Delhi, replaces kerosene subsidies with cash rebates and has been running since December. It has massively lowered demand for the subsidized fuel, which weighs on government finances.

But teething problems are immediately visible.

Hundreds of new Aadhaar ID cards are strewn in messy piles on the counter of a small tea-shop on the edge of the village. Locals drift in and rifle through the cards, looking for their own.

The government has begun the cash transfers even to people who have not received their cards, said Pushkar Raj Sharma, a local government official overseeing the scheme in the area.

On the back foot over multiple corruption allegations, the government is desperate to win back voters with effective welfare programs without further blowing out a fiscal deficit being closely watched by global credit ratings agencies.

The government is likely to spend over $55 billion this fiscal year ending in March on fuel, fertiliser and food subsidies, as well as a flagship scheme guaranteeing 100 days of work a year to rural labourers, and other welfare programmes.

Launched by Singh in 51 districts, the government says the direct cash transfer plan will eliminate millions of fraudulent benefit claimants over the next 4-5 years. It says Aadhaar could reduce subsidies by about one percentage point of GDP.

The Kotkasim plan, one of five small pilot projects across India, offers insight into issues the wider Aadhaar-direct transfer project may face when it is rolled out nationally.

Sharma said the project had cut the amount of kerosene being sold to one-eighth of the earlier levels, partially due to elimination of “ghost beneficiaries,” or duplicate identities used to claim benefits.

But he also admitted the pilot had been rolled out with little coordination with the UID database and that funds being transferred arrived only sporadically in bank accounts.

“Funds are not coming in time. Otherwise the scheme is very useful to check leakages,” Sharma said.

Many villagers were frustrated at the new system, which makes them pay market rates up to three times the subsidized cost of kerosene, and then makes it difficult to recover the money.

Tailor Dharam Pal said he had simply stopped buying kerosene he was entitled to because he faced a lengthy visit to the bank to withdraw the rebate, often to find it had not been deposited.

“I have no idea when the money will come and I have to spend half of my working day every time to visit the bank,” said Pal.

Instead, many villagers are buying more easily available cooking gas, suggesting lower kerosene sales in part represent a drop in legitimate use.

Lower sales are good for government finances whatever the reason – but obstacles to cheap fuel do not play well with voters.

“The government will have to pay a price in elections. Not even half of the people in village are buying kerosene.” said Tulsi Ram, 45, a villager.

Critics warn the goal of registering the biometric data of 1.2 billion people — currently being carried out by two different enrollment programmes — and bringing the masses of rural India into the banking system could face big problems if the wrinkles are not quickly ironed out.

“I would call it a logistical nightmare,” said Jyotinder Kaur, an economist at HDFC Bank, India’s No. 3 lender.

Kaur feared the system would be still vulnerable to graft, whereby one person could obtain multiple cards during their distribution, for example.

“I would be very cautious given the implementation risks, and the size of the population and the fact that there is really no sanctity attached to the UID,” Kaur said.