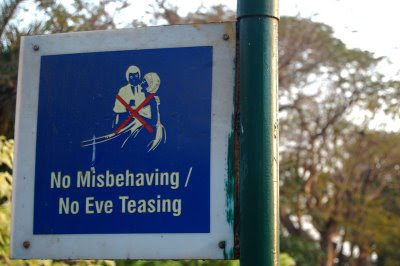 In a bid to curb eve-teasing, the Supreme Court has directed all States and Union Territories to depute plain-clothed women officers at public places such as bus stands, railway stations, metro stations, cinema theatres and shopping malls.

Giving a series of directions, a Bench of Justices K.S. Radhakrishnan and Dipak Misra said: “Eve-teasing today has become a pernicious, horrid and disgusting practice. More and more girls and women go to educational institutions, workplaces, etc, and their protection is of extreme importance to a civilised and cultured society. The experiences of women and girl children in overcrowded buses, metros, trains, etc, are horrendous, and a painful ordeal.”

Writing the judgment, while allowing a Tamil Nadu appeal against the acquittal of policeman S. Samuthiram who was accused of teasing a couple, Justice Radhakrishnan said: “Parliament is currently considering the Protection of Women against Sexual Harassment at Workplace Bill, 2010, which is intended to protect female workers at most workplaces. Provisions of that Bill are not sufficient to curb eve teasing. Before undertaking suitable legislation to curb eve-teasing, it is necessary to take at least some urgent measures so that it can be curtailed to some extent.”

“Eve-teasing,” said the Bench, “is a euphemism, a conduct which attracts penal action but it is seen [that] only in Tamil Nadu a statute has been created to contain the same, the consequence of which may at times be drastic. Eve-teasing led to the death of a woman in 1998 in Tamil Nadu which led to the government bringing an ordinance, namely, the Tami Nadu Prohibition of Eve Teasing Ordinance, 1998, which later became an Act, namely, the Tamil Nadu Prohibition of Eve-Teasing Act, 1998.”

The Bench issued the following directions: a) There will be a direction to the State governments and the Union Territories to install CCTV in strategic positions which itself would be a deterrent and if detected, the offender could be caught.

b) Persons in charge of educational institutions, places of worship, cinema theatres, railway stations and bus stands have to take steps they deem fit to prevent eve-teasing within their precincts and, on a complaint being made, they must pass on the information to the nearest police station, or the Women’s Help Centre.

c) Where either passengers or persons in charge of a public service vehicle indulge in eve-teasing, the crew shall, on a complaint made by the aggrieved person, take the vehicle to the nearest police station and give information to the police. Failure to do so should lead to cancellation of the permit to ply.

d) The State governments and Union Territories are directed to establish Women’s Helpline in various cities and towns, so as to curb eve-teasing within three months.

f) Responsibility is also on passers-by who should report such incidents to the nearest police station or to the Women’s Helpline.

g) The State governments and the Union Territories should take effective measures by issuing suitable instructions to authorities including the District Collectors and the Superintendent of Police on effective and proper measures to curb eve-teasing.