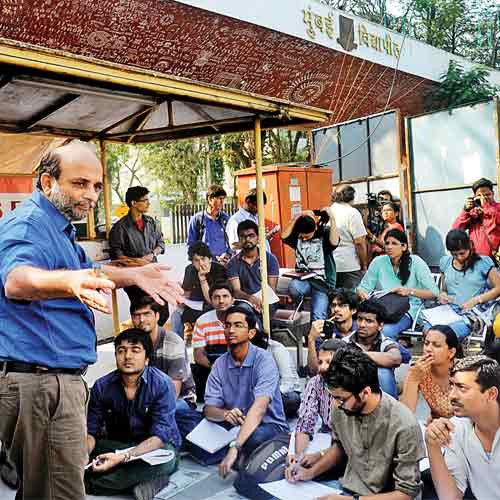 More than 40 students sat on the footpath outside the university’s Kalina campus. The afternoon heat did not bother them. From 3pm to 5pm on Tuesday, they attended a lecture by suspended economics professor Neeraj Hatekar.

The University of Mumbai suspended the professor on January 4 for speaking to the media and thus breaching code of conduct. Since then, the students have been protesting against the move.

The students were also worried about losing out on academics but they have found a solution.

On Tuesday, Hatekar took a class on the footpath near the campus entrance. “It was very sunny on the location which we had decided earlier but we didn’t want the class to suffer so moved to the footpath nearthe main entrance,” said Amol Kale, a student.

Tuesday’s class was about game theory and how it helps understand the unorganised sector in Mumbai and was also attended by students who aren’t enrolled in his course. “We have heard that he is a great teacher. This was a perfect chance to learn from him and also extend our support,” said a PhD student.

After the overwhelming response on day one, Hatekar is hoping that the numbers will grow.

“Although today was a holiday, more than 40 students turned up for the class. I expect more to join the next class,” said Hatekar.

On Wednesday, he will teach non-parametric econometrics from 9am to 11am. Tuesday’s class also saw MLCs Kapil Patil and activist Sambhaji Bhagat attending it. “Two days ago, I met the governor to discuss the suspension and he has assured us of necessary steps,” said Patil.

Sources said the governor met the chief minister on Monday to discuss the matter.

While support for Hatekar continues to pour from all corners, he is happy being back with his st dents. “I met the governor, the chancellor of the university. Apart from him, I don’t feel the need to approach anyone. The university ca not stop me from interacting with students outside the campus,” said Hatekar.

From 3 pm to 5 pm yesterday, 40 MA students attended a lecture on game theory by Neeraj Hatekar, suspended for speaking out against the vice-chancellor, outside the Kalina campus of Mumbai University

While the management at Mumbai University ousted Professor Neeraj Hatekar soon after his press conference against the state of affairs in the university, they seem to have overlooked the small matter of arranging for someone to take over the portion of the syllabus that had been allotted to him.

The students sat for two hours on the road, straining their ears against the din of the passing traffic, under the watchful eyes of the police. Pic/Amit Jadhav

His students, however, decided that no one could quite replace their beloved professor. In a show of solidarity for their suspended teacher, the students sat for two hours on the road, braving the elements and straining their ears against the din of the passing traffic, to listen to the academician’s expository on game theory.

Prof Hatekar at the lecture outside the Kalina campus gate. Pic/Amit Jadhav

Hatekar, who is a professor in Econometrics in the Economics Department of Mumbai University, was suspended on January 4 for conducting a press conference where he railed against the mismanagement rife in the university administration, and accused the Vice Chancellor Rajan Welukar of violating several university norms. In a subsequent interview with MiD DAY, he was scathing in his criticism of the university (‘Our VC runs the varsity like a kitchen cabinet’, January 11).

Ever since the suspension, his students have been missing him sorely. Eager to hear him address them again, they requested him to deliver the lecture outside the Kalina campus of the university. Around 40 MA students showed up for the lecture outside the university’s main gate. The class continued from 3 pm to 5 pm, with Hatekar discussing the fundamentals of the game theory, such as the prisoner’s dilemma, dominant strategy, and competitive equilibrium.

Students of the varsity claim that they have been feeling the pinch ever since their professor was shunted, in the absence of the lectures that had been allotted to him. They approached Hatekar, who agreed to hold his lectures in General Economics and Statistics outside the university gates, as he no longer has access to a proper classroom. As news of the lecture spread, a team of 25 policemen sped from the Bandra Kurla Complex police station and stood guard at the site, to swoop in and take charge at the first sign of trouble.

Left in the lurch
At the time of his suspension, Hatekar was teaching the Microeconomics- II module to students in the second semester of their MA in Economics course, and multiple linear regression and its extension to fourth semester students. Microeconomics-II is a compulsory subject, while the other is an elective.

Lectures on these subjects have not been held since January 4, said the students. A total of 118 students were being taught these two modules by Hatekar, and were left in the lurch when the lectures were suddenly suspended. The MA in Economics is a credit-based course and a minimum of 72 credits is required to clear the course. Exams are held once every six weeks.

Speaking to MiD DAY about the experience, Dr Hatekar said, “The students requested me to hold the lectures, and I agreed as I don’t want their academics to be hampered because of my suspension. We have decided to have the lectures outside the MU gate, once a day, according to the convenience of the students. I cannot deliver the lecture in any hall, so we had to sit outside the MU gate.

For the first time, a lecture took place alongside a police van. Around 40 students came to attend my lecture today.” Meanwhile, two students were detained by the BKC police for shouting slogans against the suspension during VC Rajan Welukar’s address during the The Octave festival at the Kalina campus last evening.

Former office bearers speak
A professor under suspension can be unofficially permitted to hold a lecture. He should have been told. The option of giving a lecture voluntarily should have been extended to him. The authority should have approached him to tell him that he could come and take the lecture in class for the bonafide students of the university. A suspended professor is supposed to come and report to work every day. There is no reason to stop him. There is very immature leadership in the university. Many times, people on suspension are asked to come and do their work in an emergency. We have done this in the past.
– A D Sawant, former pro vice Chancellor, Mumbai University

What is wrong if Professor Hatekar teaches in the university? Nobody should prevent him from teaching. He may not offer administrative services but if he tells the VC that he is very keen on teaching the students, I don’t think any VC will say no. He should take the initiative and a room will be made available to him. That is the job of the director of the Economics department.
– Dr Snehalata Deshmukh, former vice chancellor

The BUCTU feels the University has taken a decision which is illegal, improper and without following proper procedure. The vice chancellor should withdraw this suspension and since the university has completed 167 historical years, it should think about improving its status.
– C R Sadashivan, president of Bombay University and College teachers Union

Students speak
We have many books to read from, but learning from Hatekar Sir is a different experience altogether.
– Paramita Debnath, MA Part II

It was our first experience of sitting on the footpath to learn from the professor. There was a lot of disturbance, but what could we or Sir do? We are the ones losing out and want to attend sir’s lecture, having missed many of them after his suspension. We are ready to attend his lecture even in the middle of the road. We have no other option.
– Rituparna Bhattacharya, MA Part II, Semester IV

The Other Side
Vice Chancellor Rajan Welukar of Mumbai University remained unavailable for comment. Dr Naresh Chandra, Pro Vice Chancellor of the varsity, said, “He is not prohibited from campus, but yes since he is suspended, as per the rule, he may not be able to teach. His department knows whether students are missing any lectures or not.”