India’s premier journalism institute is barring its own teachers from speaking to the press? #FOE #WTFnews

Should India‘s premier journalism institute bar its own teachers from speaking to the press?

4.7K
Total Views
From St Stephen’s in Delhi to the Indian Institute of Technology Madras, last year many campuses in India saw student protests against curbs on their freedom of expression by authorities, resulting in a nationwide debate on whether a university’s rules can supersede the rights of an individual. However, what remains largely unnoticed is the fact that many universities go beyond students and even bar their teachers and other academic staff from speaking out.

In one such move, the information and broadcasting ministry is attempting to put in place a code of conduct at the premier media college Indian Institute of Mass Communication which, many believe, will effectively silence the voices of teachers on the campus and prevent them from interacting with the media or expressing opinions in their personal capacity about the institution or even social, political and cultural issues.

The proposal to introduce the Central Civil Services Conduct Rules has been pending since last October but its recent discussion in the Executive Council meeting has taken it one step closer to being implemented, even as many teachers are protesting the move.

The rationale, according to the institution, is that other universities have code of conducts based on the same model but many are questioning the idea of gagging faculty when most of them are journalists and editors who are training students for careers in media.

“The I&B ministry diktat is asking journalists to not do journalism while they are supposed to teach it,” said a faculty member on condition of anonymity. “The agenda has been there for a year but it has gathered pace since the Modi government is trying to take away all our academic freedom.”

Another faculty member added the government is trying to run an autonomous institution as its own arm by taking away the freedom of expression of the faculty members bit by bit. “We want to be left alone and function as the autonomous institution that we are,” he said. “But we are going to be the next FTII if these changes aren’t resisted and the faculty doesn’t stand united against these proposals. Who would want to teach at such a place?”

Minutes of the Executive Council meeting held on July 2 accessed by Scroll showed that that the council “considered the adoption” of the government of India guidelines for IIMC and “resolved to approve” the proposal. 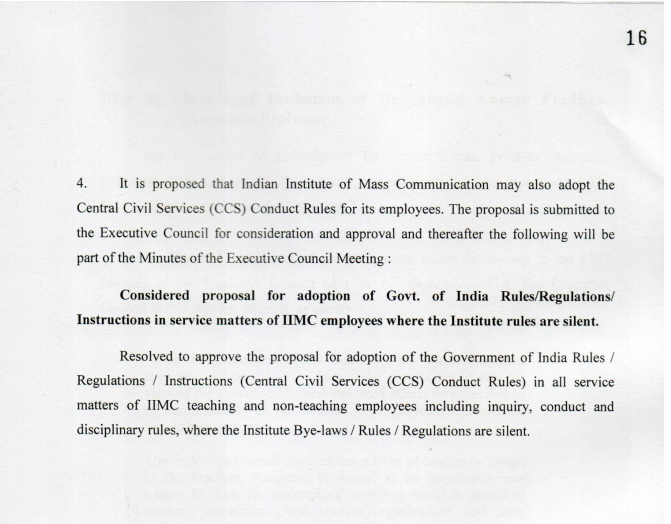 Scanned copy of the official minutes of the EC meeting
When asked for a response, Sunit Tandon, the institute’s Director General, said, “It is under consideration that IIMC should align its conduct rules with those that prevail at most Central Universities for the benefit of the employees.” However, he added that “the faculty has requested more time to study the matter and any decision in this regard would be taken subsequently.”

The faculty, meanwhile, put forward a note stating their objections to the council (a copy of which is with Scroll) and argued that most universities such as Jawaharlal Nehru University and Jamia Milia Islamia are governed by the UGC’s code of professional ethics instead of the Central Civil Services Conduct Rules.

“The CCS Rules are applied in very rare cases where their Act, Statues, Ordinances and Regulations are silent. Significantly, IIMC’s own Bye-Laws had not included CCS Conduct Rules for faculty with a clear purpose and vision to provide them freedom and autonomy.

In fact, the UGC regulation [of] 2010 encourages and provides points in promotion for writing in newspapers, magazines and journals.”

Even though Jamia’s code is silent on speaking to the press, it does prescribe that employees refrain from communicating any information unofficially to any person outside the university or inside it if they are not officially authorised to communicate.

However, the politically active campus of JNU is largely free from any such restriction as many from the university not only write regularly for mainstream media but have also formed political associations or contested elections.

Anuradha Chenoy, Dean of the School of International Studies at JNU agreed that she hadn’t come across such a code of conduct at the institution that bars the faculty from writing or expressing views to the media.

“Many professors from JNU regularly write on issues of national importance in the media and they are free to express their views,” she said adding that the university is not too stringent on curtailing the freedom of expression of its staff.

However, IIT-Delhi’s official code of conduct bars teachers from participating in radio shows or contributing articles to the media without prior sanction, if the work is not purely literary, artistic or scientific in nature.

“Such articles must be strictly confined to purely scientific subjects and should not touch upon administrative matters. They shall be free from all political things,” the code states.

The code also goes on to state that no employee can make any statement in the media, either anonymously or in their own name, which shall have an adverse effect or result in “criticism of any current or recent policy or actions of the institution” or trouble its relations with the government of India or other institutions.

IIT-Bombay’s faculty handbook also specifies similar rules which states that the Director’s permission is required before the faculty expresses its views on an issue that’s not purely academic in nature.

“Talking to the press (this includes all forms of interaction with print and electronic media) on any other matter should generally be avoided, and left to functionaries in the main building,” it states.

The University of Delhi’s code for teachers, albeit silent on the matter of speaking to the media, promotes free expression and exchange of ideas.

According the code, teachers should “express free and frank opinion” by participating in professional conferences and seminars and adds that they should participate in “extension, co-curricular, and extra-curricular activities including community service.”