Kashmir- Amid Communal Clashes , Kishtwar sees an act that binds

For those who spread hatred, this should be an eye-opener. 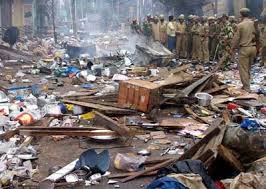 Monday, Aug 12, 2013, 7:20 IST | Place: Srinagar | Agency: DNA
Ishfaq-ul-Hassan
When Kishtwar was burning, a group of Muslims set an example of communal harmony by reaching out to a Hindu family to help them to solemnize the marriage of their son without any hassles.
Twenty-eight-year-old doctor Ashish Sharma was eagerly waiting for the moment to bring his lady-love home when communal clashes swept across Kishtwar township on Eid-ul-Fitr. Shock descended on Ashish and his family who thought all might be over and they would have to postpone the wedding.

Enter the Muslim youth of the locality and Ashish’s dream became a reality —  and the wedding  became the most memorable in the town. Muslim families of Shaheedi Moholla escorted the groom and his family to safety so that his marriage could be held on time.

“When riots broke out, we could not go out. But Muslims played a crucial role. They came out of their homes and escorted us to a nearby area where we were given police protection. Later, Muslims escorted our women folk back home,” Dr Ashish told dna.

Locals said there are only three Hindu families living in Shaheedi Moholla. For ages, the Muslims and Hindus have been living in harmony in this area which has earned the name of Island of Peace.

“We contacted the administration seeking help but they urged us to postpone the marriage. It was Muslims who supported and escorted us through danger zone so that our progamme does not get disturbed,” said Chander Shekhar Sharma, uncle of the groom.

Muslims did not rest after that. When the groom returned, they made all arrangements in his house to welcome the bride. “We came back after a day. But the entire moholla was at our home. They gave a rousing welcome to bride and groom,” said Sharma.

Kishtwar had a rich tradition of communal harmony until a few years ago. “There are examples when Hindu girls have been tying rakhis to Muslim brothers. Muslim youth used to play Ram Leela a few years ago. Muslims and Hindus have been living with each other for ages. And it was proved on Eid again,” said Malik Mohammad Umar, district president of Youth People’s Democratic Party.