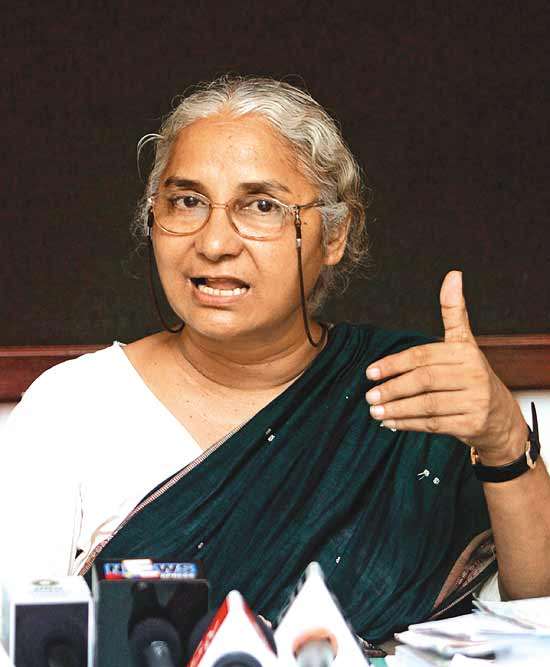 The first blow was the new BJP government’s unilateral decision to raise the wall of the Narmada Dam by 17 metres, something the Narmada Bachao Andolan’s spearhead Medha Patkar has had been fighting for years. Now it appears the government is set to clamp down on the NGOs that are active in opposing big business. Patkar spoke to Prachi Pinglay-Plumber. Excerpts from the interview:

What do you make of the recent IB report coming down on ngos run on foreign money?

If the foreign funds coming to them are legal, then there is nothing wrong with it. When you are talking about foreign direct investment (FDI) in railways, education, infrastructure and even defence, what right do you have to talk about foreign funds in NGOs? We do not take foreign funds as ours is a movement not an NGO. We get free legal services from lawyers, we take old computers and furniture and we work on very little money.

One of your organisations was also named?

Ours is a decentralised outfit and small organisations are formed all over. Narmada Sagar may be named but nothing will come of it. This is an overarching strategy to intimidate voices of dissent.

So you think the real reason isn’t tracing funds sources but more to do with clamping down on the NGOs and spread fear?

Yes. They don’t want any barriers in their corporate agenda. NGOs and social organisations challenge that. So the authorities project it as if outsiders are coming and protesting against development projects. But they are merely representing locals—farmers, adivasis, the displaced. Also, if the organisations are protesting within constitutional and legal limits, then it is their right to do so. To curb the right to express and the right to agitate is going against the Constitution. It’s absolutely fascist. It is typically Modi’s style, not to say no on your face but employ other ways and means. For instance, look how undemocratically they decided on the height of the Narmada dam, despite clear SC decisions on the rehabilitation of the 2.5 lakh displaced people.

This talk of economic security is also flawed. Income generation has to increase but all the jobs are given out as contract jobs. I believe in self-reliance but in our country everything from nuclear energy to the education sector has foreign investments/involvement. We are importing technology for eve­ry­thing. How is this self-reliance?

What is your next course of action?

We’ll have to challenge it. A government which is soaked in foreign funds is targeting us. There will now be harassment, false cases and anyone who opposes is going to be branded anti-development, anti-national. Today, it is the environment movements and NGOs. Next it will be the trade unions. There needs to be a wider alliance of all diversified forces. Even if they differ on some things, a cross-section of people should come tog­ether to resist this. That’s why we have called for a public debate on this whole development issue that this government is forging through.