The above POSTER is by Rahul yogi deveshwar 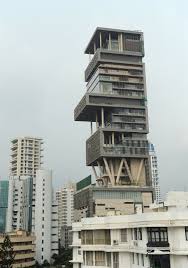 Mumbai police is mulling over a proposal sent by the office of RIL Chairman Mukesh Ambani to set up a police chowki at his sprawling residential building ‘Antilia‘ in Altamount Road here.

The proposal comes in the wake of a letter purportedly by terrorist outfit Indian Mujahideen in February this year threatening to harm Ambani and damage his residence Antilia for “supporting Gujarat Chief Minister Narendra Modi and investing heavily in that state”.

“We have received a letter from the office of Mukesh Ambani and are thinking over it. However, there would be few formalities to be complied with and we are mulling over the issue,” said Deputy Commissioner of Police, Zone II Nisar Tamboli.

The police would also have to seek permission from the civic body to set up a police chowki at the 27-storeyed building in South Mumbai. If enough FSI is not available, Brihanmumbai Municipal Corporation would have to give additional FSI for this purpose, sources said.

Police have already approached the BMC for permission to set up the chowki. Sources in the Civic body confirmed that the police chief had written a letter to them seeking approval for the station at Antilia.

According to police, the proposed chowki would be for the entire area encompassing Altamount Road and not just Ambani’s residence. Police bandobast has already been provided at that place but there is no room to house the policemen.

During rains, policemen have no roof where they can seek shelter and also they have to go to nearby areas to go use a washroom. These difficulties would be overcome with the setting up of the chowki, sources said.

Following the threat letter received by Ambani’s office, police security in and around Antilia has been tightened. The letter was not on IM letter head and was also not signed by any IM office bearer. Crime branch probe is still on to find out who had sent the letter.