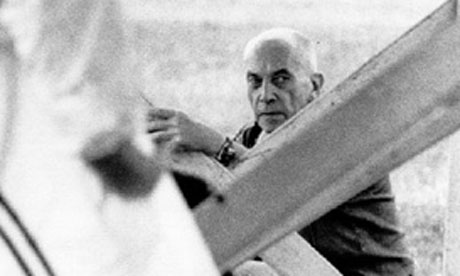 Chris Marker, the enigmatic master of left-field French cinema, has died at the age of 91. The artist and film-maker was best known for his award-winning documentary Sans Soleil and for his haunting drama La Jetée, charting the quest for memory in the aftermath of a nuclear apocalypse.

Born Christian François Bouche-Villeneuve, Marker fought for the French Resistance and then cut his teeth as a journalist and a critic for Cahiers du Cinéma. He made his film debut with Olympia 52, a documentary on the 1952 Helsinki Olympics, and went on to become a leading light of the Left Bank Cinema movement alongside his friends Agnès Varda and Alain Resnais. In 1961 he sparked controversy with the documentary Si Cuba, a film that praised Fidel Castro, denounced America and was promptly banned in the US.

Marker’s other notable pictures include 1985’s AK, an essay on the work of the Japanese director Akira Kurosawa, and 1977’s A Grin Without a Cat, charting the socialist struggle in the period before and after the 1968 Paris uprisings. He scored an arthouse hit with 1983’s Sans Soleil, his elliptical meditation on travel and memory that darted from Japan to Africa via an appreciation of the 1958 thriller Vertigo. Hitchcock’s movie, said the director, was the only film “capable of portraying impossible memory, insane memory”.

Yet Marker’s most influential production remains 1962’s La Jetée, a 29-minute drama composed almost entirely of still images and tracing one man’s attempt to reclaim an image from his past. Marker’s poetic, provocative meld of global catastrophe and human frailty went on to inspire the 1987 drama The Red Spectacles and Terry Gilliam’s 1995 blockbuster 12 Monkeys.

The teasing, elliptical nature of Marker’s work was reflected in the man himself. He refused to give interviews, hated being photographed and claimed to have born in Mongolia despite contradictory sources that suggested he was a native of Paris. All of which, wrote the critic David Thomson, fostered the notion of Marker as “some mysterious if ideal figure, a hope or a dream more than an actual person”. He was, Thomson added, “the essential ghost”.