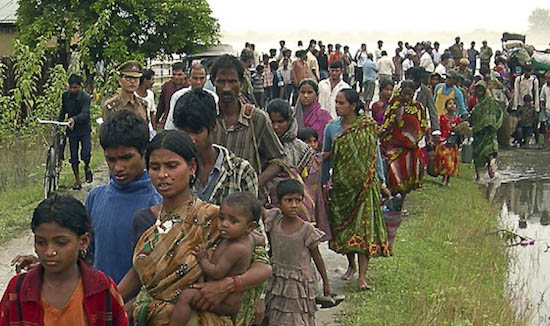 Are these people expected to return to their villages and hometowns to hang around waiting for the Unique Identification Authority of India to set up shop?
Sunil Sethi /  December 08, 2012, Buisness Standard
Workers returning to their jobs in metros from remote villages in Bihar and Jharkhand have lately been complaining that they are barred from boarding trains unless they show sufficient identification, including proof of residence in cities. Whether this is a run-up to the Aadhaar scheme for direct cash transfers launched by the government with fanfare, or an effort to check uncontrolled urban migration, is not clear. But the demand, alongside a sense of insecurity, among the vast unorganised labour force for some sort of pehchan patra (identity proof) is growing.
These are mostly people of no fixed address — workers on construction sites, in domestic employment or in small trade, people you encounter daily. Earlier this year, when the local residents’ welfare association ran a month-long and relatively well-organised Aadhaar enrolment camp, there were many such people in the queues for biometric tests. They were firmly weeded out for inadequate proof of tenure — no electricity bill, voting card or bank account. At the regional passport office applicants are similarly eliminated. Are these people expected to return to their villages and hometowns to hang around waiting for the Unique Identification Authority to set up shop? If Delhi alone records an in-migration of about 2.5 million every decade and an estimated 30 per cent of its inhabitants live in slums, it will be a long shot before they can lay their hands on pensions, education and healthcare benefits delivered in cash via Aadhaar cards.
In the old days, before Delhi achieved new levels of prosperity, the only recourse people of no fixed address had for finding an identity was the ration card, an entitlement of grain and sugar through the public distribution system. Ration cards were easy to fix for a small pay-off — but they enabled urban migrants to get on to electoral rolls, equally easy to penetrate through the good offices of political parties in search of vote banks. As a vote-catching ploy for 2014 the Aadhaar pilot scheme sounds good; as a reality it may be harder to get off the ground. Reports from some of the 51 districts earmarked for initial coverage confirm that many village clusters had never heard of a bank, so direct bank transfers of subsidies may be easier said than done.
I recently tried to help a person of no fixed address (though he held a bona fide voter’s card and driving licence) open a bank account. Despite my sifarish and assurance of a guaranteed minimum deposit, the manager asked for his PAN card. When I protested at the absurdity of such a demand, he scrutinised the pehchan patras in hand. Bewilderingly, the driving licence had been issued in Nagaland. How an applicant from district Darbhanga, unable to point out Nagaland on a map let alone having ever been there, acquired such a document was anybody’s guess. He failed to open an account and soon afterwards lost his job. Any migrant to a city will tell you that he doesn’t depend on banks to remit money home, but well-oiled alternate hawala networks.
Aadhaar could help change all that. Except the unique identity (UID) project hasn’t got round to addressing how it will track down India’s floating millions or, trickier still, several million non-Indians afloat in the country. Nearly a dozen states, from Uttarakhand to Arunachal Pradesh, share fairly porous borders with Nepal, Myanmar and Bangladesh with a largely unaccounted – and possibly unaccountable – population. How will they be discounted?
The prime minister hailed the Aadhaar project of direct cash handouts to the poor as a “pioneering initiative” and he’s right. Rooting hard for the scheme, Jairam Ramesh calls it a “game changer” and he’s wrong. As an electoral game it may be too late. And it will be later still before people of no fixed address can carry home the cash.