Police must be a public Service, not a political Force 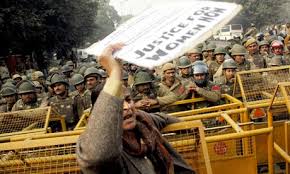 In totalitarian states, police serves the regime and suppress es the population. In a democracy, the purpose of policing is fundamentally different. Before you can reform our police, you need a vision of what the purpose of police is.
In a democracy, its purpose is to be able to ensure the safety and security of life and property, prevent and detect crime and, most of all, create an environment in which people could enjoy their Constitutional rights. The work of the police, therefore, is to protect and enable. They must be a service, not a force, much like the fire or ambulance service. When in difficulties, people should be able to call on their services without any hesitation. That is not so now.
Police have not only to enforce the law, they have to uphold it. There is a difference. To uphold the law, you must always work within its four corners. Police has to be the role model for the public. Today, it is not.
A policeman is just a citizen in uniform. So the composition of the police must reflect the diversities within the communities they serve. For example, the national average of women in police is not even 5 percent. There is no reason why efforts should not be made very early on to have all-women recruitment drives.
Police cannot be apart from the communities they serve. How can they be invested in securing the safety of the community if they don’t live amongst it. How can they understand their fears, their worries, the risks they have to bear, if the police are deliberately isolated in quarters. That separation forces them into an unhealthy subculture that creates mutual suspicion. Their isolation from the public ensures that their reactions are defensive, impervious and often violent. This has to be removed.
The police leadership often says that the police come from society and therefore cannot be expected not to share society’s biases and prejudices. But we all have our prejudices, our likes and dislikes. We also have a duty not to act on them to the detriment of others. That, in fact, is why we are policed. The collective identity of the police cannot be based on defensiveness and isolation from the public, it has to be based on pride at providing admirable public service.
Merit, not patronage and pull, must be the criterion for career advancement in the Police. Promotions, and punishment for dereliction of duty or criminal wrongdoing, cannot be in the gift of patrons outside the police force. It must be part of the system. In Prakash Singh vs Union of India, the Supreme Court had directed that the police shall have a Police Establishment Board and four senior-most police officers will sit in the Board on promotions and transfers of officers. This gives the police leadership an opportunity to clean up its house and put in place clear criteria and transparent process, where the fairness of its choices will be very evident. This is also one way to break the circle of outside patronage and create a cohort loyal to the institution.
But in many cases, the leadership has chosen to be supine and continue to wait for the recommendation list to come from outside authority. If politicians are assured that only their recommendations will work, then their friends will pedal influence and effect positive outcomes for their favourites.
Police should be given operational autonomy. And with full control over management, administration and operations of the police, must come full responsibility. Giving operational responsibility to the police does not mean that the political executive and legislature don’t control or supervise the police. It just means that powers and functions need to be clearly defined, with police, politician and bureaucrat each understanding the limits of the other. This division of powers and functions is essential to found good policing.
A system of reporting and reviewing police performance every year to an attentive legislature is also part of the changes that will make for better policing. Today, serious discussions about police — the adequacy of their budgets, numbers, composition, infrastructure, capabilities, training, skills, specialisations, annual goals and performance — is seriously missing from legislative bodies and from public knowledge. Instead, the discourse is dominated by the need for tenure, the inconvenience of transfers and handwringing about the ‘plight of the poor constable’.
The proof of good policing lies in its performance. Today, the critic judges police only by its misbehaviour and illegality. The politician, by how low the crime registration is. To keep crime figures low, police simply don’t register cases.
Police performance must be measured against realistic goals set after wide public consultation with local communities and understanding what the police needs to be able to fulfill expectations. The most important measure of policing is how safe people feel, especially the weak and vulnerable; how peacefully we can all go about our business; how willing people are to assist and cooperate with the police.
The consequences of poor policing are there for all to see. We see around us the ascendance of the criminal from petty thief to politician. We see more and more brutality, more oppression of the weak and vulnerable, and no place to go when there is damage and danger. Police practice itself is too often imbued with illegality and institutional bias.
Police have to cleanse themselves. This doesn’t require us to wait on brand new laws. It just requires highminded leadership. But all too often, its bad apples are protected and impossible to bring to book. It is this breakdown that fuelled the public resentment and anger, which we saw erupt on the streets of Delhi last December. We were angry. Now, we need to be better informed about how we are policed, and work out with the police, policy makers and our communities how we can break through resistances and change the police that we have, into the police that we want.