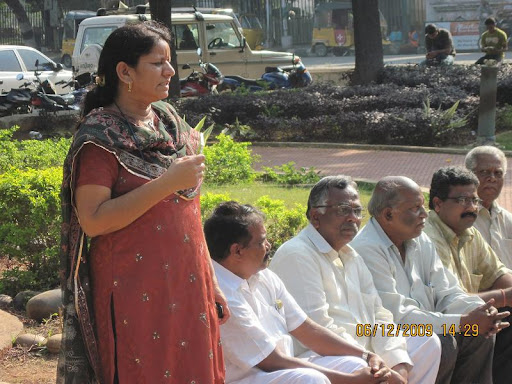 The PUCL strongly believes that the arrest of Ms. Jaya Vindhyala is a vindictive action of the state police meant only to silence the growing voice and demand for fair, independent investigation into the corrupt deals of the Chirala MLA as also other high dignitaries and officials.

The PUCL feels that the timing of the arrest on a Sunday is to ensure that no legal recourse like bail can be availed by Ms. Jaya. The PUCL questions the need for the state police to arrest Ms. Jaya Vindhyala especially in view of the Supreme Court directions in
the case of `Joginder Kumar vs State of UP’, (1989) that arrest of a person need not be effected if the person will appear before the police on summons and there is no danger of the person absconding, threatening witnesses or tampering with evidence. This is not the case in the case of Ms. Jaya Vindhyala who is a widely respected person, and is a senior and well known Advocate of the AP Bar and is a well known human rights defender.
It is revealing to note that the three FIRs registered by the Chirala police against Ms. Jaya, includes offences under section 307 (attempt to murder), 506 (threatening with intention to kill), 120-B (Conspiracy) IPC and Information Technology Act. These provisions are routinely abused and misused by the police to foist false cases and in the cases against Ms. Jaya, we learn, are all based on false allegations not making out any of these offences.

The PUCL has also learnt that 9 other members of PUCL – AP have also been named in the FIR and the police is hunting them down.

The PUCL demands the immediate release of Ms. Jaya Vindhyala and closure of all the cases against her, as also other PUCL members, in Prakasham district.