Remembering Shahid Azmi: Can the Love of Justice be Assassinated ? 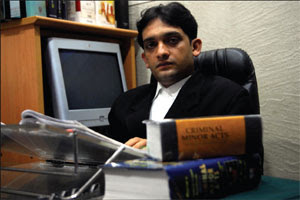 Progressive lawyers, social activists and academics have invested much time in trying to puzzle out what is the progressive potential of law. Sometimes, answers to deep philosophical questions emerge from a single life. Shahid Azmi’s life   (1977-2010) exemplifies one answer to this perennial question. It was a life which took to the legal profession with the objective of using  law as a shield and tool in the quest for justice. It was also a life which was tragically cut short, when Shahid Azmi was assassinated  at the  age of thirty three.

Shahid entered the legal profession, emerging out of a crucible of experiences which few people have had. At the age of sixteen, in the midst of the Mumbai communal violence of 1992-93, he faced violence from the mob, courageously confronted  a policeman who was threatening to shoot a woman and thereafter did relief work in  the Muslim community. Disillusioned by the way Muslims were targeted in Mumbai 1992-93,  he then left to Kashmir with the aim of joining the militants. Unhappy with that experience, he  returned to  Mumbai.

In December 1999, he was  arrested by the Mumbai police and taken to Delhi where he was implicated in a plot to assassinate politicians including  Bal Thackeray.  He was in jail for five  years, during  which he experienced various forms of physical and mental torture as well as several months of solitary confinement. According to Shahid’s brother, Khalid Azmi, in Tihar jail, Shahid was told by one of his co-prisoners: “There are two ways in life: one is to take to the gun to assert your rights, but that is the wrong path. You can also take a pen and fight your enemies till your death. Which path you decide is in your hands.” Shahid was also encouraged by Kiran Bedi  to study.  He completed his twelfth standard as well as a  B.A. while in Tihar  jail. He was subsequently acquitted by the Supreme Court.  On his release, at the  age of twenty two, he was determined  to continue the struggle against injustice.  For this reason, he studied and completed  a course in both journalism and law.

Shahid Azmi’s journey from the Mumbai slums to courts is unique. His life in Govandi in  Mumbai, where he was raised in a lower middle-class woman-headed family with four brothers, taught him the meaning of poverty and deprivation; the communal violence in Mumbai made him conscious of the vulnerability of Muslims in a climate charged with religious fundamentalism; his experiences in the Tihar jail gave birth to a feeling,  that perhaps law was a tool in the struggle against oppression. Shahid did not have the advantage of an affluent family, a law degree from a renowned university or clientele which was passed down from other family members. He stepped into the helms of the legal profession with a baggage of disadvantages, including the fact that his Muslim identity and the history of imprisonment put him on the radar of the police for several years after his release from jail.

As a lawyer in his brief but impressive career of seven years, he represented those who were falsely accused of  terror charges by an Indian state all too willing to tar innocents with the brush of terrorism. The iconic case in Shahid’s legal career was the trial in the Mumbai terror attacks of 26 November 2008. Shahid represented Faheem Ansari who was a co-accused along with Ajmal Kasab.

Shahid’s sharpness and brilliance as a criminal lawyer was instrumental in securing the acquittal. In  Khalid’s opinion,  Shahid was able to cast reasonable doubt on the case of the prosecution that Faheem Ansari was indeed involved in the attack at all. The state’s case was that Faheem prepared the map,  went to Nepal and forwarded it to Sabauddin who forwarded it to Inter-Service Intelligence (ISI) or Lashkar-e-Toiba (LeT) and the map was shown as recovered from the pocket of Abu Ismail – who was killed in the same encounter in which Ajmal Kasab was taken into custody.  Shahid’s argument was that Faheem never prepared a map, and that at the relevant time , Faheem was in Lucknow jail. Shahid highlighted to the court  that  the map which was shown as being recovered was a fresh map and did not even have folds on it. There was not a single drop of blood on it, which was most strange, if it had actually been recovered from the pocket of Abu Ismail. The map is supposed to have changed many hands, and  travelled from Nepal to Pakistan and from Pakistan via sea to Mumbai and was yet creaseless and had not become soft due to the sea’s humidity. Shahid also questioned the need for a hand-drawn map in the age of computers, as well as writings with two different inks on the panchnama – indicative of manipulation of evidence. The cross-examination of  Shahid ensured that Faheem was acquitted by the  trial court. Unfortunately Shahid was killed some months before the order of acquittal dated 3 August 2010. Both the High Court and the Supreme Court concurred with the findings of the sessions court subsequently.

Shahid  represented the accused  in other  cases such as  the Ghatkopar bus bombing case of 2002, Malegaon blast case of 2006,  Aurangabad arms haul case of 2006 and Mumbai train blasts of 2006. Shahid also took up the cases of 64 suspected operatives of the Indian Mujahideen involved in the Ahmedabad terror strikes of 2008.  He argued that the Maharashtra Control of Organised Crimes Act (MCOCA) should  be used for organized crime but not for terror cases. He argued that Section 2 (1)(e) of MCOCA which focuses on “causing insurgency” could not be justified solely on the basis of confession unless corroborated by circumstantial  evidence.  The Supreme Court responded positively and stayed the trials in Malegaon blasts case, Mumbai train blasts case and Aurangabad arms haul cases.

Shahid alleged custodial torture of persons accused in the Mumbai train blasts case, in Arthur Road jail and petitioned the Bombay High Court in July 2008.  The High Court ordered an inquiry and found his allegations to be true, and held that jail superintendent Swati Sathe was responsible for supervising and directly perpetuating  the torture.  Strictures were passed against her by the court and predictably, she was transferred without loss of pay. Shahid was also successful in preventing the screening of the film ‘Black Friday’ until completion of the trial into the 1993 attacks, in order not to prejudice the mind of the public or the courts.  Unfairly named as a ‘terrorist’s lawyer’, he did not confine his work to anti-terror cases, but worked for asserting the rights of the poor who were ousted when Mithi river was beautified  as well as slum dwellers whose houses were being demolished. The numerous people who sought his legal assistance and  the late hours which Shahid kept are testimony to his commitment as well as his courageous advocacy.

The words of Roy Black – an American criminal defense lawyer – were pinned on Shahid’s desk and inspired him till the day of his death. It aptly summed up the principles Shahid stood by in his life:

“By showing me injustice, he taught me to love justice. By teaching me what pain and humiliation were all about, he awakened my heart to mercy.  Through these hardships I learned hard lessons. Fight against prejudice, battle the oppressors, support the underdog. Question authority, shake up the system, never be discouraged by hard times and hard people.  Embrace those who are placed last, to whom even bottom looks like up.  It took me some time to find my mission in life – that of a criminal defense lawyer. But that ‘school’, and that Teacher, put me on my true path.  I will never be discouraged. Even thorns and thistles can teach you something, and lead to success.”.

Perhaps emblematic of the impossibility of extinguishing the ideal for which Shahid stood for is the path taken by his youngest brother Khalid. Khalid was inspired to study law by Shahid, who told him that sooner or later he would be killed and that ‘if something happens to me you should carry forward the work’.  It was barely four months after Khalid completed studying law that Shahid was shot dead in his office in Kurla. The responsibility  fell on Khalid to take up his brother’s cases and complete them.

The time following Shahid’s assassination was a time of fear, with many advocates unwilling to take on Shahid’s cases. However Khalid ensured that there was a continuity in his brother’s work by first appointing counsel after much difficulty, and thereafter arguing the cases himself.  He  simultaneously  built a team of young and committed lawyers to carry forward  the sensitive and life-threatening work. Khalid himself is  barely thirty years of age and seems too young to discharge such an enormous responsibility.  When asked  whether he was ever afraid that he too could be killed,   Khalid responded:  ‘I have never felt a fear because I have nothing to lose. I have lost my brother – that means that I have lost everything.’ It is also admirable that their mother, Rehana Azmi, after losing one son, extends  consistent support to the work of the other son in the perilous path of justice, while the eldest brother, Arif Azmi, quietly backs his family.

Shahid’s story also  spoke directly to film director, Hansal Mehta and producer Anurag Kashyap, who  recently completed  a film on Shahid’s life, titled ‘Shahid’. A Shahid Azmi memorial lecture has also been commenced in February 2012. These will,  perhaps,  inspire many others to take forward the legacy of Shahid.

The question which his killers need to ponder on is –  Did you kill the desire for justice by killing Shahid Azmi? Shahid’s assassination may have created an initial fear and insecurity among defence lawyers handling similar cases.  But today, it has inspired numerous Muslim youth in the locality where he worked and was killed,  to study law and enter the legal profession, to carry forward the ideals that Shahid stood for.  This, despite the clear and imminent danger to their own lives, which they are acutely conscious of. In a manner similar to the shooting of Malala Yousufzai that has strengthened the determination of girls to access education, the killing of Shahid has given a new lease of life to his work – from within an underprivileged community of Mumbai that has long been wronged by state agencies and fundamentalist groups alike.  The assassination  of Shahid, instead of killing the work that he had undertaken, has only succeeded in multiplying  the quest for justice in innumerable hearts and minds.

* Arvind Narrain is a lawyer with the Alternative Law Forum.  Saumya Uma is an independent researcher on gender, law and human rights.