Right to Strike-Putting the agenda of the workers at the forefront.

Vol – XLVIII No. 09, March 02, 2013
India witnessed one of the largest mobilisations of its industrial and service sector workers in recent times when millions went on a two-day strike on 20 and 21 February to oppose the government’s economic policies and demand better working conditions. From reports in the mainstream press and from the trade unions and striking workers, it does appear that the strike saw a greater reach than before and made enough of an impact to make “the deaf hear”. This is amply evident in the manner in which striking workers were attacked in different parts of the country. It is also evident in the shrillness with which the mainstream press attacked the strike and high­lighted a few sporadic instances of violence by workers. There has been less discussion about the demands of the workers and more about the loss to the “country”. The business press, in a touching expression of concern, editorialised on the ­welfare of workers and advised them on how to better-meet their interests.

The demands of the strike include a minimum wage of Rs 10,000 a month, pension and social security for workers irrespective of whether they are in the organised or unorganised sector, the universalisation of the public distribution system to cushion against rampaging food inflation, equal wages and rights for contract and regular workers, the abolition of contract labour, the right to form unions and collective bargaining, an end to inflation, and enforcement of labour laws. It will be evident that each of these demands is a matter of life and death for workers today. This journal itself has carried, with tragic monotony, detailed reports and research on how working and living conditions have, at best, stagnated and, in most cases, declined, while the country’s gross domestic product has multiplied many times over and the living conditions of those at the top of the pyramid have improved visibly. Working hours have been steadily increased without any improvement in working conditions or wages. In their race to invite private capital, governments are doing their very best to keep labour costs depressed and labour relations “peaceful”. In reality, this only means that workers are being exploited more and have fewer platforms for redress.

This is not merely an unsustainable trajectory it also goes against the very fundamental rights of citizenship which are granted by our Constitution. It is therefore only right that workers are standing up to demand what is theirs and which has been denied to them repeatedly. A dispassionate appraisal of the workers’ demands indicates that, if granted, they would just about suffice for basic survival in present conditions. These cannot be begrudged by silly talk of “loss”; from precisely those very sections that are the most pampered with exemptions, subsidies and bailouts.

It is telling that the government has largely ignored this strike. It is a reminder of our political context that a few thousand people gathered to demand a Jan Lokpal Bill or gender justice can move the government and the mainstream media to hyperactivity, but many millions of workers demanding basic living conditions are ignored thus! This is not to deny the importance of the fight against corruption or for gender justice, but an acknowledgement of the fact that our freedoms and our politics are still very much defined by class relations. It was the repeated refusal of the government to accede to the demands of the workers that forced them to exercise their right to strike.

While the fundamental right to strike is necessary in such conditions, the larger failure of the strike despite its very success brings us to question the strategy of the trade unions and ask whether it was right to call for strike. It is increasingly evident that strike as a weapon in one factory, one sector or even one industrial cluster is often successful in providing workers ­immediate relief. However, this weapon seems to be losing its effect when deployed not in a targeted manner but over a ­larger geography of the country or state. Is it wise to expose the ultimate weapon of the working class to such corrosive contexts? Further, an overwhelming majority of India’s working people are either informal labour or self-employed, often both. Many of them work in conditions that render them substantively unfree as they remain indebted to their credit supplier. Does the strike call of the organised sector workers in such conditions help unite the working class or does it ­provide its enemies with a ready-made divisive tool? This is not an argument against the right to strike, rather a plea to think of new and innovative methods of class action by working people.

There has been a clear rightward shift in the mainstream political arena with the ruling Congress trying hard to ­appropriate many aspects of the Bharatiya Janata Party’s agenda. In such conditions, growing working class activism is not ­only welcome but crucial to the survival of a democratic republic. The demands of the industrial strike of 20 and 21 February 2013 are just and should have been met without workers having to go on strike. However, this government, hitched as it is to the sentiments of private capital, is highly unlikely to accede to these demands. It is necessary therefore for industrial workers to build alliances with the struggles for livelihoods in all parts of the country. 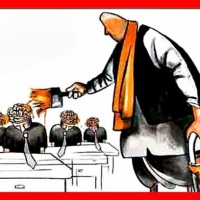