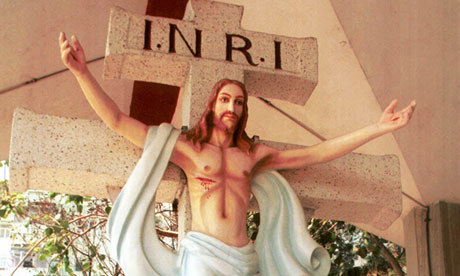 A statue of Christ in Mumbai. Local people declared a miracle when ‘tears’ trickled down the statue at the Church of Our Lady of Velan Kanni. Photograph: Sherwin Crasto/Associated Press

When water started trickling down a statue of Jesus Christ at a Catholic church in Mumbai earlier this year, locals were quick to declare a miracle. Some began collecting the holy water and the Church of Our Lady of Velankanni began to promote it as a site of pilgrimage.

So when Sanal Edamaruku arrived and established that this was not holy water so much as holey plumbing, the backlash was severe. The renowned rationalist was accused of blasphemy, charged with offences that carry a three-year prison sentence and eventually, after receiving death threats, had to seek exile in Finland.

Now he is calling for European governments to press Delhi into dropping the case. And on the first leg of a tour around EU capitals on Friday, he warned that India was sacrificing freedom of expression for outdated, colonial-era rules about blasphemy.

“There is a huge contradiction in the content of the Indian constitution which guarantees freedom of speech and the blasphemy law from 1860 under then colonial rule,” Edamaruku told the Guardian in an interview in Dublin.

“This blasphemy law can affect anyone in India – even a girl recently who wrote on Facebook against closing down a city because of the death of a famous local politician. She was prosecuted under the blasphemy law and another girl who ‘liked’ her comment on Facebook was also arrested and then charged with blasphemy.”

Edamaruku, who has the support of rationalists and atheists such asRichard Dawkins, is well known in India for debunking religious myths, and was already unpopular among Indian Catholics for publicly criticising Mother Teresa‘s legacy in Kolkata.

When the state “miracle” was pronounced, he went to Mumbai and found that the dripping water was due to clogged drainage pipes behind the wall where it stood. His revelation provoked death threats from religious zealots and ultimately charges of blasphemy under the Indian penal code in the Mumbai high court.

“India cannot criticise Pakistan for arresting young girls for blaspheming against Islam while it arrests and locks up its own citizens for breaking our country’s blasphemy laws,” he said. “It is an absurd law but also extremely dangerous because it gives fanatics, whether they are Hindus, Catholics or Muslims, a licence to be offended. It also allows people who are in dispute with you to make up false accusations of blasphemy.”

Edamaruku said his exposure of the weeping statue was also a contribution to public health in Mumbai as some believers were drinking the water hoping it could cure ailments. “This was sewage water seeping through a wall due to faulty plumbing,” he said. “It posed a health risk to people who were fooled into believing it was a miracle.”

He has been living in Finland since the summer. He was in Europe on a lecture tour in July when his partner rang to say the police had arrived at his flat. “I felt really upset because under the blasphemy law you cannot get bail until the court case begins. I would be in jail now if I had been at my apartment in Delhi,” he said.

He has spurned an offer from a senior Indian Catholic bishop to apologise for the exposure of the “miracle”.

“The Catholic archbishop of Bombay, Oswald, Cardinal Gracias, has said that if I apologise for the ‘offence’ I have caused he will see to it that the charges are dropped. This shows that he has influence in the situation but he will not use it unless I apologise, which I will not do as I have done nothing wrong,” he said.

“In a way I am lucky because I have friends and supporters in Europe. I am well known in India and have the telephone numbers of at least five Indian cabinet ministers. And I have some means of fighting back. But what would happen to the common man or woman if they were accused of blasphemy? They would be sent straight to jail without any chance of bail,” he said.

Edamaruku asked for “mounting international pressure”, particularly fromIreland and other EU nations, on the Indian government. Delhi had the power to halt the prosecution before a court case, citing a lack of evidence to pursue it, he said.

“Blasphemy laws are very strange because they can be both very silly and also very sinister. They are very silly because you are talking about crying statues and moving statues or Virgin Marys appearing in tree stumps in Co Limerick. But on the other hand these type of laws are used in Islamic countries to jail people or sentence them to death. Or in Sanal’s case facing a jail sentence for his work exposing bogus miracles.

“The Irish government should pay attention to Sanal’s case and realise they must get rid of this absurd and dangerous law. Because we shouldn’t be so smug in Ireland. After all, we have had the hysteria about moving statues and a man bringing people to a shrine in Co Mayo so they can look at the sun and see the Virgin Mary.”