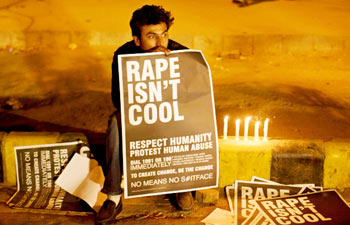 An anti-rape protester
President Pranab Mukherjee has given his assent to the anti-rape bill which provides for life term and even death sentence for rape convicts besides stringent punishment for offences like acid attacks, stalking and voyeurism.Mukherjee accorded his assent to the Criminal Law (Amendment) Bill-2013 on Tuesday, brought against the backdrop of the country-wide outrage over Delhi gangrape , and it will now be called the Criminal Law (Amendment) Act, 2013, an official release said on Wednesday.The law, passed by Lok Sabha (lower House of Indian Parliament) on March 19 and by Rajya Sabha (upper House of Indian Parliament) on March 21, has replaced an Ordinance promulgated on February 3.It amends various sections of the Indian Penal Code, the Code of Criminal Procedure, the Indian Evidence Act and the Protection of Children from Sexual Offences Act.

With an aim of providing a strong deterrent against crimes like rapes, the new law states that an offender can be sentenced to rigorous imprisonment for a term which shall not be less than 20 years, but which may extend to life, meaning imprisonment for the remainder of the convict’s natural life and with a fine.

It has provisions for handing out death sentence to offenders who may have been convicted earlier for such crimes.

The law, for the first time, defines stalking and voyeurism as non-bailable offences if repeated for a second time. Perpetrators of acid attack will attract a 10-year jail.

It also defines acid attack as a crime besides granting a victim the right to self-defence. It also has provisions for imposing a minimum 10-year jail term for perpetrators of such acts.

The law has fixed age for consensual sex at 18 years.

New sections to prevent stalking and voyeurism were introduced following a strong demand from women’s organisations.

The amendments seek to define and prescribe punishment for the offences of stalking, voyeurism and sexual harassment.

The law also seeks to widen the definition of rape, broaden the ambit of aggravated rape and enhance the punishment for such crimes.

It also provides that all hospitals shall immediately provide first aid and/or medical treatment free of cost to the victims of acid attack or rape, and failure to do so will attract punishment.

It has provisions for a minimum imprisonment of seven years which may extend to imprisonment for natural life, and a fine for rape convict if he is found to be a police officer, a public servant, armed forces personnel or management or hospital staff.

The law also seeks to amend the Indian Evidence Act to allow a rape victim, if she is temporarily or permanently mentally or physically disabled, to record her statement before a judicial magistrate with the assistance of an interpreter or a special educator. It also has provisions to video-graph the proceedings.