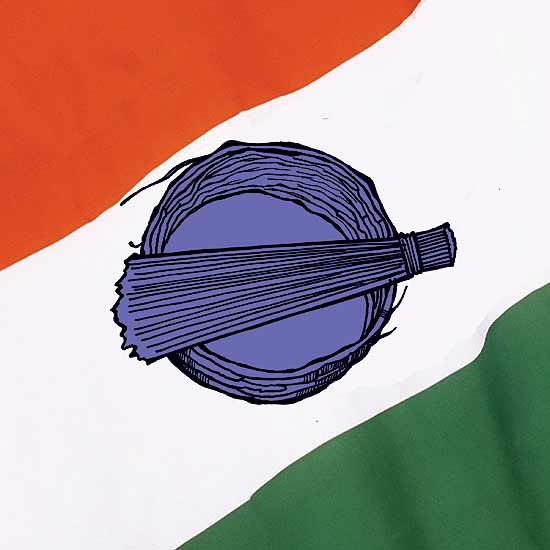 Silence Eva Jayate
Aamir Khan not only deviously censored any discussion of Ambedkar and Reservation, but seemed content to use the 1920s language of high-caste reformers
S. Anand

This Sunday morning I received a call from a friend who alerted me to the tenth episode of Aamir Khan-anchored Satyamev Jayate since the focus was on caste and untouchability. I mumbled something about his spoiling my Sunday, but tuned in nevertheless. It began with Kaushal Panwar narrating her harrowing tale for about twenty minutes: from her childhood where she was forced to join her mother in cleaning shit to her pursuit of a PhD in Sanskrit. I was glad that the audience heard her say that the discrimination she had experienced in her school in a Haryana village was no different from what she faced in the enlightened campus of Jawaharlal Nehru University in Delhi—where she continues to be denied a rightful job.

Following Kaushal, we were allowed a glimpse into the life of Balwant Singh, author of the tract An Untouchable in the IAS. I noticed a shot of him looking up to a larger-than-life portrait of Dr B.R. Ambedkar in his Saharanhpur house, and realized that so far—30 minutes into the show—there had been no verbal mention of Ambedkar. Balwant Singh, among the first dalits to enter a career in civil service in post-independence India, had said in his interview that he was perhaps the first and only IAS officer ever to be demoted to the rank of tehsildar. That had been edited out. I intuitively felt the show was going to scrupulously avoid any mention of two key ideas—Reservation and Ambedkar. I was hoping to be proved wrong. I wasn’t.

How did Kaushal Panwar do her BA, MA and PhD and land a job with Delhi University? What is it that facilitates access to hitherto-excluded spaces for dalits? What is the one policy that enables dalits to stop cleaning shit and reclaim their humanity? The one weapon that helps them get an education? Get a job? Reservation. And who made this policy possible? Ambedkar. But Aamir Khan wouldn’t mention the R and A words even once for fear of alienating his middle class audience, which as a friend perceptively said, is fed “bourgeois moralism of the most pathological sort,” on a programme where “the only solution turns out to be nothing more than emotional catharsis”.

Not surprisingly, Khan would also not mention the fact that an atrocity is committed on a dalit every 18 minutes according to the National Crime Records Bureau. The penchant Khan and his research team showed for various laws and statistics in the first two episodes of SJ that I had seen—on prenatal sex determination and domestic violence—was nowhere on display here. Hence no mention of the Prevention of Atrocities Act of 1989 and its dismal failure to curb violence against dalits. No discussion of a case like Khairlanji, where, in 2006, the mother and daughter, Surekha Bhotmange and Priyanka Bhotmange, had not just been raped repeatedly but tortured in ghastly ways (stripped, paraded naked, with fact-finding reports saying bullock cart pokers were thrust into their vaginas, and that Priyanka was raped even after her death). An interview with Bhaiyalal Bhotmange, the sole survivor of the Khairlanji carnage, may have not fit into the preordained script.

Then the show featured documentary filmmaker Stalin K. Padma and several clips from his three-hour film India Untouched. Again, the cherry-picked excerpts skirted any reference to A and R. In a cringe-worthy moment, Stalin even fawned on Khan and congratulated him for taking up the issue of untouchability on television 65 years after independence.

This was followed by homilies from His Holiness, Justice (retired) C.S. Dharmadhikari, who in his self-introduction, pretending to denounce labels, paraded every label of privilege that adorned his CV—including the ‘blessings’ allegedly bestowed by Adi Sankara on his ancestors. This man could equally pompously announce his Deshastha Brahmanness as his apparent rejection of it. I would have given up right then but for the fact that I had spotted Bezwada Wilson in the audience, and I was waiting to see if this leader of the Safai Karamchari Andolan—a man who had pioneered the demolition of dry latrines across India—would salvage the morning. He too was asked to narrate his early life, and he too shed tears. As did Khan with practised ease.

The next day I called Wilson and told him I was annoyed that even he did not bother to mention Ambedkar and Reservation. Wilson clarified that he indeed had. It had been edited out, as was his rant against the Supreme Court and Parliament—since both institutions had been dragging their feet on the issue of manual scavenging. Then he revealed something that shocked me. He said he had not been in the audience when Kaushal Panwar was being interviewed by Khan. I countered saying I had seen him ‘reacting’ to what Kaushal said on stage. “Even I saw myself in the audience and hence was shocked,” said Wilson. He said Kaushal had been interviewed in total isolation, in an empty studio. And yet on Sunday we saw, every once in a while, close-ups of fretful, anxious, pained and agonised faces of members of the studio audience as Kaushal was narrating her story. They even clapped on cue, like when Khan asked Kaushal her heroic father’s name. Clearly, all this had been manipulated and faked—with clever editing and splicing of shots.

I checked with Kaushal if this was true. It was. I further found that Khan and his team had shot interviews with two members of the Dalit Indian Chamber of Commerce and Industry—its chairman Milind Kamble and key advisor Ashok Khade. They were informed just a week ahead of the 8 July telecast that their interviews wouldn’t be aired since they “did not fit in with the story”. In fact, when Chandra Bhan Prasad, mentor to DICCI and an exponent of ‘dalit capitalism’, watched the show with Kamble in Pune, they could not believe their eyes. Kamble’s interview with Khan had been shot with Dharmadhikari and Kamble seated next to each other on the studio couch; but Kamble had been weeded out. Prasad wondered if some ‘dirty trick editing’ made this possible. More likely, Dharmadhikari took a leaf out of Khan’s book and did not mind giving a ‘fresh take’ minus the unsuitable presence of Kamble. I also discovered that every participant on the show is forced to sign a ‘confidentiality agreement’ saying they will not speak about their participation—recorded many months ahead—in any social media.

In his weekly column in The Hindu, Khan began his discourse with “Gandhiji’s struggle” for “those ostracized as untouchables”. Perhaps Khan and his ghostwriters did not ever hear about what young Bhimrao had to face right in Satara at age 10. After a few paragraphs extolling Gandhi, Khan mentions “Babasaheb Ambedkar” in passing, as someone who led the drafting of the Constitution. Since the bulk of SJ’s episode chose to focus on manual scavenging, and since Dharmadhikari and Khan chose to highlight Gandhi’s imagined role in the fight against this practice—an issue largely and sadly neglected even within the dalit movement—let us turn briefly to what Gandhi said about “the most honourable occupation”.

Gandhi wrote in Harijan in 1934: “I call scavenging as one of the most honourable occupations to which mankind is called. I don’t consider it an unclean occupation by any means. That you have to handle dirt is true. But that every mother is doing and has to do. But nobody says a mother’s occupation is unclean.” In another essay entitled ‘The Ideal Bhangi’ in 1936 he wrote, “My ideal Bhangi would know the quality of night-soil and urine. He would keep a close watch on these and give a timely warning to the individual concerned. Thus he will give a timely notice of the results of his examination of the excreta. That presupposes a scientific knowledge of the requirements of his profession.” It is this stranglehold of Gandhism that has kept manual scavenging alive.

Ambedkar held a view that was the exact opposite: “Under Hinduism scavenging was not a matter of choice, it was a matter of force. What does Gandhism do? It seeks to perpetuate this system by praising scavenging as the noblest service to society! What is the use of telling the scavenger that even a Brahmin is prepared to do scavenging when it is clear that according to Hindu Shastras and Hindu notions even if a Brahmin did scavenging he would never be subject to the disabilities of one who is a born scavenger?” Ambedkar argued that in India a man is not a scavenger because of his work, but because of his birth irrespective of whether he does scavenging or not.

Khan and his team not only deviously censored any discussion of Ambedkar and Reservation, they seemed content to use the 1920s language of high-caste reformers. A friend chided me saying I shouldn’t expect Khan to be an activist. But surely my friend did not know how Khan manipulates and fools his audience—in the studio and outside—to nod and cry at moments he chooses. Wilson said, “In fact, during the shoot it was not I who actually began crying. Aamir Khan started to cry, so I was forced to cry along.” Khan obviously thinks we can flush away middle class shit with tears.

S. Anand is publisher, Navayana. A shorter, edited version of this appears in print. OUTLOOK