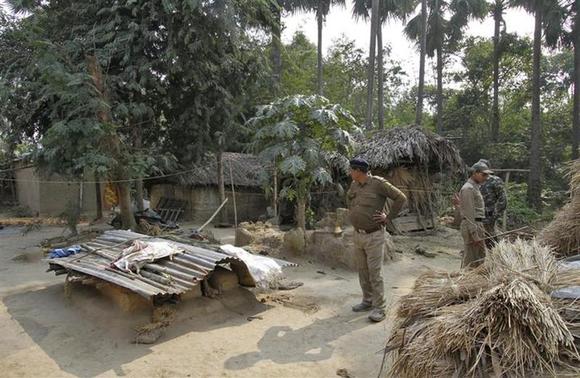 Police personnel inspect the area where a woman was gang-raped at Birbhum district in West Bengal January 23, 2014.

Notwithstanding the freezing cold, rehearsals are underway for the Republic Day parade. Slideshow

(Reuters) – The Supreme Court on Friday ordered an investigation into the gang rape of a 20-year-old woman from a tribal region by 13 men on the orders of a village court, a case that has sparked protests demanding swift justice.

The woman, who is recovering in hospital, told police she was assaulted by the men on Monday night in the Birbhum district of West Bengal as punishment for violating rules of her tribe by having a relationship with a man from a different community.

The ruling by the top court underscores the sensitivity of sexual violence issues following the fatal gang rape of a physiotherapist on a moving bus in Delhi in December 2012 – an attack that sparked nationwide demonstrations and political uproar.

In the West Bengal case, police said that the woman’s male companion was tied up in the village square, while the assault on the woman happened in a mud house. The man has now gone missing from the village, relatives say.

The woman was in stable condition, the hospital said.

There were sporadic protests in West Bengal, where earlier this month there were large demonstrations against police who have been accused of failing to act on the gang rape of a 16-year-old girl who was later murdered.

“This is complete sadism and the authorities must do something,” said rape victim and activist Suzette Jordan, whose case also sparked massive protests against the police and the West Bengal state government.

West Bengal’s Chief Minister, Mamata Banerjee, under fire for being slow to act over rape cases, removed the superintendent of police of Birbhum from his post for failing to take swift action against some alleged attackers linked to her political party.

Nityananda Hembram, a senior leader of the tribal Santhal community, said there was a campaign to malign the tribal culture by distorting the facts in this case.

“She may have been raped but of what I gathered she was warned ahead by the womenfolk of the village against living with a man from another community without marrying,” Hembram told Reuters.

India toughened laws on sex crimes in March last year after the brutal assault in Delhi.

The issue was highlighted in local media again last week after a 51-year-old Danish tourist was gang-raped in central Delhi by at least five men whom she had asked for directions.

In West Bengal, the couple were ordered to pay a fine of 25,000 rupees, said the victim’s mother, adding that the village head then ordered the rape of her daughter.

In northern parts of India, illegal village councils known as “Khap Panchayats” act as de-facto courts settling rural disputes on everything from land and cattle to matrimony and murder.

But such councils are coming under growing scrutiny as their punitive edicts grow more regressive – ranging from banning women from wearing western clothing and using mobile phones to supporting child marriage and sanctioning the lynching of young couples in so-called “honour killings”.

West Bengal recorded the highest number of gender crimes in the country at 30,942 in 2012 – 12.7 percent of India’s total recorded crimes against women. These crimes include rape, kidnapping and sexual harassment and molestation.