The following article was written bySeema Chandra, a student activist of Lucknow University, over an incident of caste discrimination suffered by her younger sister and college mate – Garima Chandra. Instead of acting on it, the University has only ended up legitimizing it by not only doing nothing against the errant students, but actually practising it themselves.

After nearly a month of the incident, fed up over the inaction of the University, Seema and Garima with support from their college mates, activists and few faculty staff will be protesting on 7th December against the incident and the University’s failure to respond. To know more about the protest or to send solidarity messages to Garima and protest mails to the University, please contact Seema directly at ceema.chandra@gmail.com (with copy tonewsocialist.in@gmail.com). Seema can also be reached at 8765829986. To generate more support for this campaign, please do consider signing this petition

New Socialist Alternative (CWI-India) is in complete solidarity with Garima Chandra and we demand that the University of Lucknow take immediate action and see to it that such incidents are not repeated in the future. Such incidents are not rare occurrences, but are practised daily in several colleges and Universities across the country.

Capitalism, instead of eliminating casteism, has ended up accentuating caste based practices and is linked to the social structure of Indian society which is controlled mainly by upper caste-class. As long as Capitalism and landlordism exist in India, casteism shall be an inherent part of its socio-economic structure and this system of divide and rule will only continue.

“Please do not make me pay the price…!!”

Now “understand what comes by birth and cannot be cast off by dying is caste”. Wiping off the tears and in the loudest of her voice she says “where is my fault..? Is it a crime to be a Scheduled Caste? I wish if god would have asked me once the choice to choose the caste!”

This is what exactly happened on 5th of November in Social Work department of Lucknow University, when Garima Chandra (a student of the same department) was harassed by her three female classmates on the grounds of her caste and had to endure the mental trauma.

When the matter was reported to the coordinator of the Social Work department, the coordinator in his least bothering tone said “…please whatever you people have to do, do it outside the department.” The members of the Proctorial board were informed in writing about the same incident, they laughed off and said “You people should make yourself flexible. All these things have been carried out from generations and Scheduled Caste people will have to tolerate with all this”. The same matter was reported once again on 7th November 2012 to the Proctor board.

The matter was further taken up to the Vice Chancellor of the Lucknow University. However the assurance was given that matter would be inquired and something would be done about it. It is almost a month, a committee was made to further look into the matter. When the committee was hearing into the matter, three of the female teachers made fun of the victim. They giggled over all this and said: people who are Daliths are in the habit of taking revenge over their caste. It is just a small issue do not make a hue and cry over it. If someone has said something, it is a daily routine, what is new in it? Be with it, do not oppose, compromise on it.

The victim was not even heard or made to put her opinion in front of the committee. Was it her caste that had made others laugh over it? Instead of understanding it is as a deep psychological wound, everyone else thinks it is can simply be patched up. God only knows what are the morals of these teachers. What is more shameful is that caste discrimination is being so openly practised in a secular institutions like a university.

Say no to Casteism!

The passing out batches in the Social Work department will be out in the field soon and practice the same. Even though we are living in a class based society, but caste is still a huge problem in India. Do these same people understand the mental wound one goes through in such cases? If University does not act soon, in the future we will only hear more such cases. Or maybe in the future it would become part of our lives to hear such incidents daily.

When such cases crop up, i wonder why constitutional protection against caste discrimination is totally ignored? Why do people forget that practising casteism is a prohibition under the Constitution and it’s a crime and offence as stated in Article 17? The need of hour is to raise and to reach out to more and more people irrespective of their backgrounds and support anti-casteism. Every institution should make sure that caste based practices are a thing of the past or else those institution or its faculty plus its students who practice casteism, should be held accountable and taken to task accordingly.

News Clipping on Garima Chandra’s ordeal in University of Lucknow: 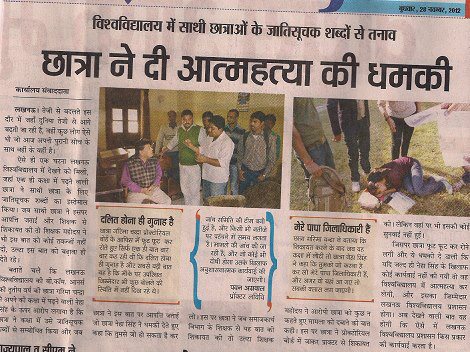