Walking in those Chappals – Farmers of Vidarbha 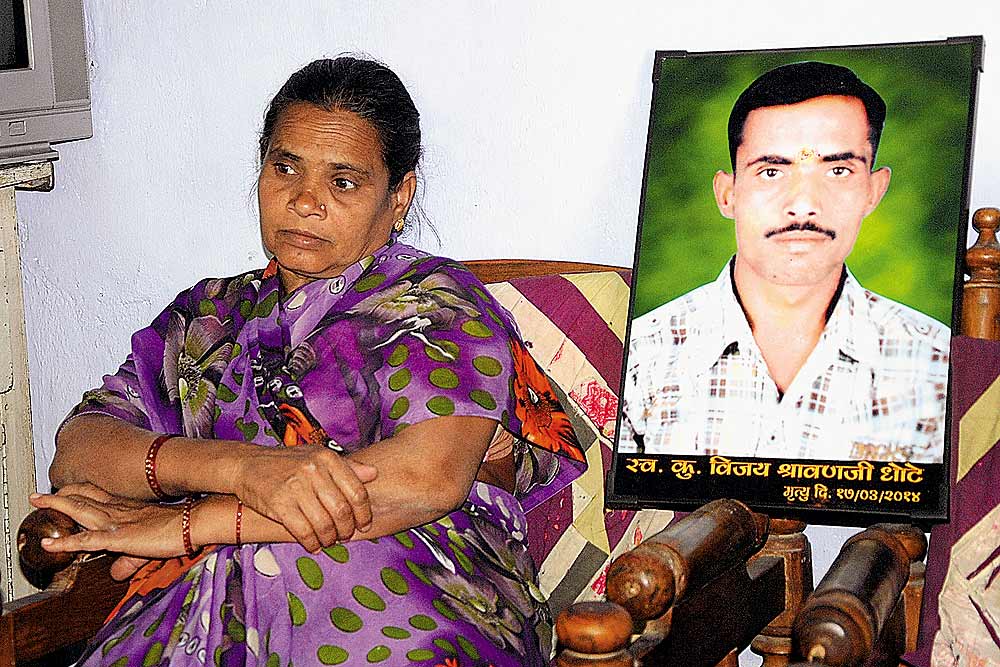 SUDARSHAN SAKHARKAR
Pramila Dhote with a picture of her son Vijay Dhote at Boregaon, Nagpur district.
VIDARBHA
Walking In Those Chappals
Constantly, up against nature’s fury, the farmers have cried hoarse and don’t care who comes to power. Because nothing really changes.
PRACHI PINGLAY-PLUMBER

As I write this, Rukma Kele in Bramhi village, Yawatmal district would be braving 45 degrees or thereabout to cast her precious vote.

Just two days ago when I landed in her village looking for political reaction of villagers to the agrarian crisis of Vidarbha, I stumbled into their village of around 300 families. Their crops were lashed out by the hailstorm and, previously, by the excessive rains in July-August.

As they all huddle to explain the extent of damage, Nanda runs to her house to bring a handful of pale brown wheat grain, blackened chana (chickpea), dust-ridden cotton. I go after her to see how they store and what they plan to do with the existing bad quality crop. “Wait wait, don’t go without chappals, it’s blazing,” Rukma screeches. I quickly put on some chappals and rush in.

The villagers talk about ministers’ visits, an MP’s protests (Bhavana Gawli, sitting MP is from the Shiv Sena), elections and their farming woes as if they are all unrelated matters.

“The farmers have lost hope that anything new can actually happen and any political party will actually take up the cause of prices, which is the crux of the matter,” says an associate of Sharad Joshi, Swatantra Bharat Paksha and founder of Shetkari Sanghatna.

Unfortunately, he is proven right even in other parts of Wardha, Nagpur and Yawatmal, the hotbed of farmers’ suicides that resulted in every one from Rahul Gandhi to Manmohan Singh visiting, a humungous loan waiver package, that helped, but only briefly. Suicides continue— 17 in a period of just about a couple of months, claims one organisation.

Constantly, up against nature’s fury— dry drought, wet drought, excessive rains, hailstorms— the farmers have cried hoarse asking for better irrigation (less than 20% of the farmland is irrigated, which means farmers cannot really sow multiple crops). They have been demanding better prices (minimum support prices) for the crops but if we need to keep urban inflation down, the food prices, as essential commodities, cannot go up. Add increasing cost of production in terms of pesticides, fertilisers etc. Add real personal problems/challenges/social compulsions, such as weddings, illnesses and so on. How to separate one from the other? How does one classify which suicide is because of alcoholism, crop failure, indebtedness, personal grievances?

“You are right madam. People do get really drunk before killing themselves. It is not easy to take your life. One has to be out of one’s senses to kill oneself and leave the loved ones,” says one farmer at Vijay Dhote’s house, Boregaon, Nagpur district. Dhote, 24, drank some poison on March 17 after celebrating Holi the previous night. He had lost the crop, got his sister married, paid for mother’s treatment— all in the past one year. Nobody realised when he consumed the “medicine.”

“There is some new pesticide that is very cheap and very effective. It burns your insides in no time,” one of them adds casually. “You are not supposed to open it. Just keeping the covered packet drives away pests,” his sister-in-law says, sounding all worried. “Arre what to do. Times are such that they will find new ways to die.” Again one round of laughter. They all said they will vote and they don’t care who comes to power because nothing really changes.

As I left Bramhi village, after drinking sweetened water to beat the heat, Rukma patted me, asked me to cover myself to protect from the sun and said “You wore my chappals in a rush. What is it like to wear a poor woman’s chappals?” She smiled. I wanted to say there is no way we could fit in their proverbial shoes. We wouldn’t last a day. “No no, nothing like that. It helped me. Thank you,” I mumbled, like all politicians on campaign.