What if the “Modi Wave” turns out pure media hype?

What if the “Modi Wave” turns out pure media hype? Where would numbers then stand? 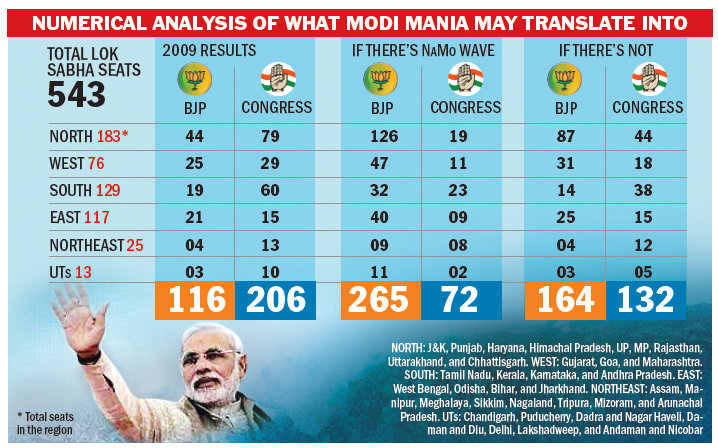 Here is a thought provoking article by Prabhu Chawla, trying to quantify the so called “Modi Wave” and compare it within a No Wave scenario. Chawla used published pre-polls as a base for such a quantification. But considering that pre-polls historically tend to over-estimate the BJP and under-estimate the Congress, the numbers could be much less skewed than the graphic below reflects.
NDTV‘s last election tracker poll conferring the NDA a simple majority would be the best case scenario for the BJP. But Chawla as many in the media have now started admitting that it is now increasingly looking that the “Modi Wave” is one of the most atrocious hoax played on the public whose seams have already come off, looking very tattered even as polls are yet to be completed.

After 6 phases and nearly two-thirds of seats already voted, what is clear is however that the Modi Wave fails a Yes or No answer but falls somewhere in-between. Primarily in states controlled by the BJP, the party is in a position to increase its tally viz-a-viz 2009. But since the party had already done well in these states in 2009, the gains are not very significant. The party can also be expected to increase its tally in some states controlled by the Congress and other non-aligned political formation. Bit these too are looking as not very significant.
My own assessment is that it is more or less cyrstal clear by now that the “Modi Wave” is not a secular trend, being  confined to largely to small pockets in the country and in very large swathes in the country, it is either totally absent and/or where the BJP manages only to up its vote shares with little or no impact on its seat shares.

In the entire South and East of the country it is fairly evident by now that the BJP has failed to whip up a wave. Even in the North and West, where stronger evidences of the “Modi Wave” at play exists, we find states like Bihar, Punjab  wherein the BJP was expected to sweep by pre-polls, the BJP is actually facing major reverses. Even in states like UP and Maharashtra, the sweep is now most likely not as comprehensive as projected by pre-polls. In the estimation of this blog,  it is most likely that the BJP and Congress end up neck-to-neck around 150 seats each, +/-20 seats which includes the projection of Chawla under its probablity…

(Prabhu Chawla in the NewIndian Express) The Indian meteorological department is a whimsical prognosticator, failing to predict the weather—including storms—quite often. Fierce arguments break out over its efficacy, but with fewer loyalists than cynics. A similar battle is on over political forecasting, with fewer takers for contrarians.
Fair weather birds have started migrating to safer climes, so that they can be sighted and counted, while prancing and preening in the changed weather. From boardrooms to newsrooms, Gujarat CM Narendra Modi is seen as manna from heaven; one who can redeem India’s miserable millions, including the richie rich, from despair.
The media has already crowned Modi India’s next PM. Ironically, those who vilified him as a monster a decade ago are now scrambling to either sit next to him or bask in his shadow. Undoubtedly, Modi is one of the most successful and effective CMs who have delivered on many fronts without facing a single corruption charge in the last 12 years. Nevertheless, his marketing skills, coupled with schisms in the BJP, made him the most sought-after leader in the world’s largest democracy.
In the age of instant data creation and ready-to-offer opinion, political astrology has never been so easy. If there are 10 people in a drawing room, at least seven are willing to wager their last paisa on Modi as PM. Most of them hate the BJP, but they feel India deserves Modi. If one calls it a Modi Wave, another terms it an impending tsunami, which will uproot evil outfits like the Left, AAP and Congress.
According to various opinion polls, self-appointed pollsters and academicians, Modi would gather a maximum of 280 and a minimum of 225 seats. No logic, however, is offered for this calculation. Even Atal Bihari Vajpayee, India’s most popular non-Congress leader ever, couldn’t win more than 183 seats for the BJP.
Even in 1977, when the entire north and west India was united against the Congress, the rookie Janata Party couldn’t seize more than 285 seats. In 1989, V P Singh, riding the Bofors scandal, could muster just 140 seats; that too with the support of the BJP and Left. In 2004, the same oracles had written off the Congress, which made a triumphant comeback. Now, traumatised, it is paying a heavy price for non-governance and scams. Nor does it have regional satraps who can swing an election its way.
The anti-Congress vote is making Modi India’s most probable PM. Predicting seats, however, is more difficult that winning them. Since Modi appears to be contesting all the 400 BJP seats, the outcome will be decided by his popularity and acceptability. If there is a wave, it should be visible in all the seats and get converted into winning numbers. A close analysis of around 50 constituencies reveals that Modi is a premier brand name.
The numerical difference between a Modi Wave and the anti-Modi sentiment is about 100 seats (see graphic). The BJP would undoubtedly emerge as the single largest party. But its capacity to form the government on its own is the real issue. The BJP is likely to snatch seats only from the Congress and not from any major regional party. It is in a direct fight with the Congress in less than 250 seats, out of which it already holds over 100, and the Congress around 150. In order to cross the 200-mark, the BJP has to gain at least 100 seats from the Congress, which could lose around 20 of its 116 current Lok Sabha seats.
The BJP is in no position to take seats away from Mamata, Mayawati, Jayalalithaa, the Left and from the Northeast parties. This can happen only if Modi can break caste, community and regional barriers, which his promoters are confident about. If the Modi wave is able to demolish traditional voting patterns, the BJP alone could cross over 240 seats.
But if Modi fails to successfully exploit anti-incumbency disgust and convert his personal popularity into votes, the BJP may not even cross its current record of 180 seats. If he fails to break Vajpayee’s record, he will be seen as leader with more hype than substance. His detractors and even some of his current companions would turn around and say the NDA lost in 2004 because of the Modi factor and has failed now because he converted the battle into Modi vs the Rest.
Readmore here — http://exitopinionpollsindia.blogspot.in/2014/04/what-if-modi-wave-turns-out-pure-media.html